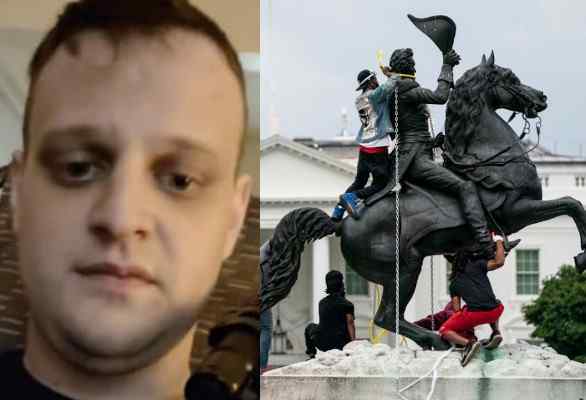 Guess he was expecting Daddy Soros to protect him.

(Big League Politics) – ANTIFA leader Jason Charter, who was charged for his role in Black Lives Matter (BLM) terror riots in Washington D.C., told Daily Caller journalist Henry Rodgers that “play time is over” following the raid of his home by FBI forces.

Charter is believed to be the ring leader who led a horde of ANTIFA/BLM revolutionaries to take down the statue of former U.S. President Andrew Jackson near the White House. He is being charged with destruction of federal property as a consequence of his alleged actions.

“They were very organized,” a federal law enforcement official said about the riot near the Jackson statue. “Charter was on top of the statue and directing people … they had acid, chisels, straps and a human chain preventing police from getting to the statue.”

The Jackson statue is not the only one that Charter has allegedly defaced. The feds also believe that he was instrumental in the toppling of the Albert Pike Historical Statue in Washington as well.

The FBI claims that Charter could be seen on video “standing over the toppled Pike Statue, pouring an unknown liquid onto the statue.”

“He is then observed waving others away from the statue, and squatting down behind the statue where his hands are not visible. Seconds later, the statue catches fire. Charter is seen standing over the flames as it burns,” the federal complaint against Charter states.

The complaint continues: “At the Jackson Statue incident, Charter is additionally seen wearing a red set of ski goggles and a yellow ventilator mask. Charter’s face is clearly visible at different times during each incident.”

Charter also demonstrated his motive for bringing down the statues in a Twitter post, reading: “Tearing down statues of traitors to the nation is a service to this nation not a crime.”

The demonstration against Jackson caught the ire of President Trump, who has fashioned himself as the modern-day incarnation of “Old Hickory.” He threatened a sentence of ten years in prison for any person caught trying to topple Jackson’s statue in a Twitter post.

It remains to be seen if Charter receives the decade-long sentence threatened by Trump, or if he gets a slap on the wrist due to pro-ANTIFA forces implanted in the deep state. Nevertheless, ANTIFA and BLM terrorists are finally starting to learn that there are legal consequences to their destructive, ignorant actions. The protection from Daddy Soros is finally wearing thin.