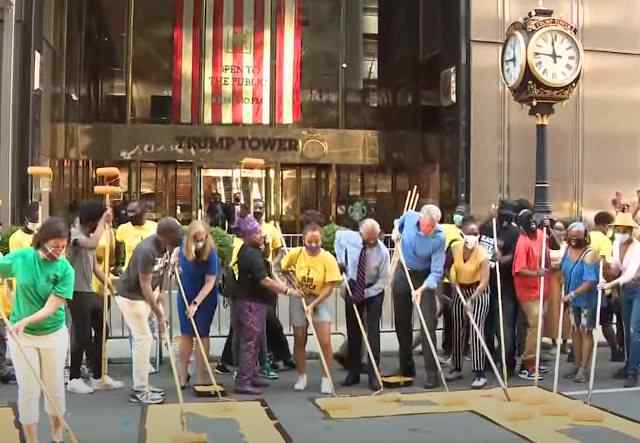 Police “not happy” about “getting paid to baby sit paint”.

(Infowars) – Even as violent crime and deadly shootings in New York soar, Mayor Bill de Blasio has reportedly assigned no less than 27 cops working in shifts to protect a Black Lives Matter mural outside Trump Tower.

“Just heard that @NYCMayor has 1 & 8 securing the #BlackMindsMatter mural at Trump Tower,” tweeted former police commissioner Bernard Kerik. “That’s one sergeant and eight cops, x 3 tours a day! Violence, shootings, and murder is up in NYC and this clown has three sergeants and 24 cops guarding a mural! If true, #SICKENING.”

His claim was backed up by Derrick Gibson, who is running for governor of New York. Gibson said that he spoke to cops on the scene who said “they are getting paid to baby sit paint, and not happy about it.”

De Blasio and his wife helped paint the BLM mural on July 9 before it was subsequently vandalized, leading the Mayor to assert, “The Black Lives Matter movement is more than words, and it can’t be undone.”

Even before the recent riots, major crime in New York City had soared by 22 per cent thanks to bail reforms that allowed suspects to avoid jail and re-offend.

Last month, it was reported that there had been 38 murders over the last 28 days up until June 14, twice as many as the previous year.

On Monday alone, 18 people were shot in 14 separate incidents. Six NYPD officers were also injured during clashes with protesters on the Brooklyn Bridge on Wednesday.

The city has already cut next year’s police budget by $1 billion, leading Houston lawyer Howard Steele to comment, “He is spending his reduced police budget on guarding his arts and crafts project instead of New York lives.”

Others pointed to the irony of having so many police guard a mural for a movement that explicitly hates them and wants them to be abolished.