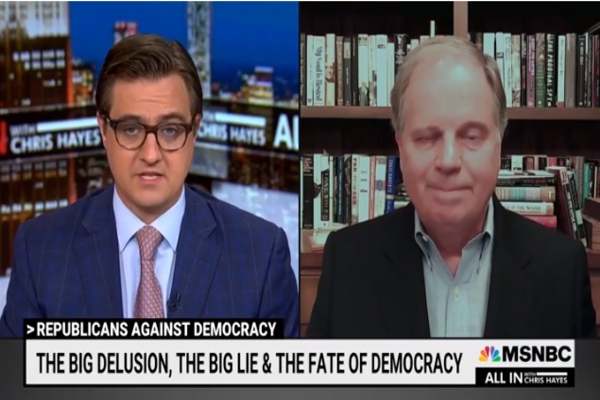 (breitbart) – Former Sen. Doug Jones (D-AL) said Thursday on MSNBC’s “All In” that he believed ten Senate Republicans would join with the Democrats to pass voting legislation if it has a narrow focus to create “a uniform set of standards” on early voting, mail-in voting and absentee voting.

Jones said, “What we are seeing happening across the country is really an attack on democracy. At some point, I think, very soon, Democrats are going to have to decide whether or not Congress can be the backstop for this. I am hoping that they will do that.”

He continued, “You know, as we talk about Jim Crow laws and we talk about voting rights. HR-1, which is a great bill, the John Lewis Voting Rights Act, all great bills. But if you want to stop this immediate assault, this immediate assault on voting rights, then you got to narrow this bill a little bit and focus on stopping that assault. There is a lot in those other bills that, really, will are good bills, good things, good pieces of legislation. Let’s focus on getting these things standards, you know, uniform standards around country.”

Jones added, “We keep talking, and we hear so many people talking about the election, what’s been called the big lie, the election was stolen, the election fraud. Well, if you want to stop this. If Republicans really want to get at this, let’s have uniform standards. We have federal elections every two years in this country. We need to have a uniform set of standards on early voting, mail-in voting, all of those, absentee voting, all of those things where people think that is fraught with peril. Let’s get some uniform standards instead of this hodgepodge from around the country. If folks focus on that, I do think there is an opportunity to get ten votes. I don’t believe that what we are hearing from all these things going around the country is representative of the entire 90% of the folks in the Senate. I think that there may be opportunities there. I really do believe that.”