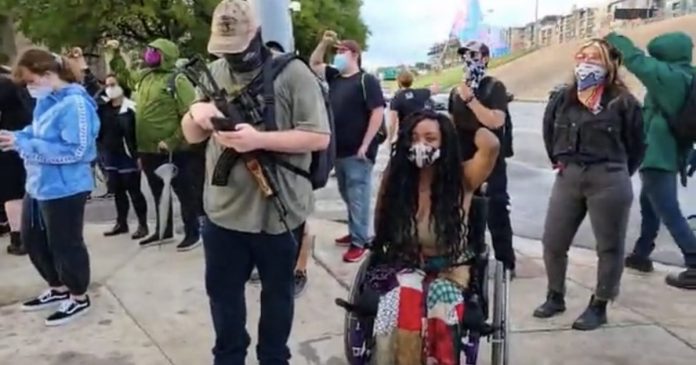 Another shooting occurred at a Black Lives Matter protest in Austin, Texas on Saturday night.

Footage of the event showed shots ringing out as protests blocked a public roadway. One vehicle was surrounded by the mob of the rioters, and some have suggested the shots could have come from the car’s motorist.

It’s still unclear what set off the shooting, but reports indicate that one protestor was critically wounded in the incident. The video suggests that two weapons were fired, making it possible that there was an exchange of gunfire between two individuals.

Garrett Foster, the Black Lives Matter protester fatally shot by a motorist in Austin on Saturday night, said on camera that the “people who hate us” are “too big of p-ssies to actually do anything about it” when asked why he was carrying a rifle.

Police are on scene.

This story is developing, and Big League Politics is monitoring the situation.

Austin Police confirmed that the individual who was shot in the exchange later died, and that he was carrying an AK-style rifle when he approached the vehicle seen in the camera footage of the incident.

It’s unclear to what extent the roadblocking protestor may have targeted or threatened the driver who engaged him. Preliminary reports indicate that the driver stepped out of his blue vehicle, shortly before gunfire was exchanged between the two men.

Roadblocking riots and protests continue to lead to tragedies on an almost predictable basis, as armed scofflaws block the public roadways without any fear of accountability from law enforcement.