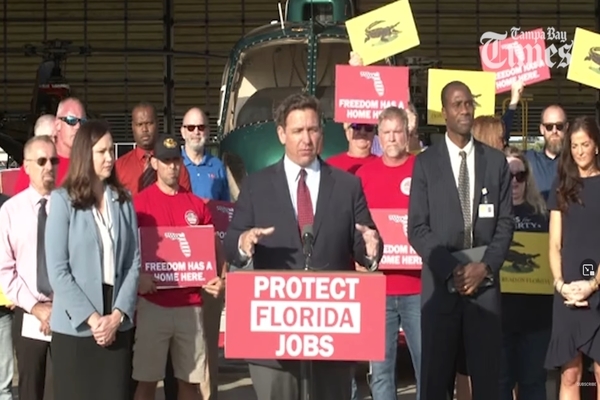 Gov. DeSantis, flanked by Attorney General Moody, Florida’s Surgeon General Joseph Ladapo, and others, in Clearwater, Florida, announced his call for a special session to legislate protections for Floridians against vaccine mandates imposed by localities, businesses, and the federal government.

Moody spoke after the governor, announcing that the state has taken legal action in Orange County, specifically, to “stand up for those first responders” affected by the mandates.

“You know right as we speak, there are folks across this nation and in Florida that are being forced to upload papers to a database to show that they have been vaccinated,” she said.

“Think about it. We are in the United States of America, the free states of America, and we have folks having to upload documentation into databases because of the mandates of this federal government. It will not be tolerated in Florida or accepted,” she said to applause.

Moody vowed that she and DeSantis will “push back against these unlawful and unwise mandates” in “every way possible.”

The official noted the absurdity of the vaccine mandates from an economic standpoint, as it will result in the loss of “thousands” of workers across the country as the economy struggles and inflation hits hard.

First responders, she said, are being forced to resign “when nationwide we are seeing unprecedented vacancies in the ranks of our law enforcement and first responders.”

“That is dangerous, absent-minded, and I cannot believe a leader of the free country like the United States of America would ever get behind anything like that,” she said, adding that “no president of the United States in history has mandated a federal vaccine on its people ever.”