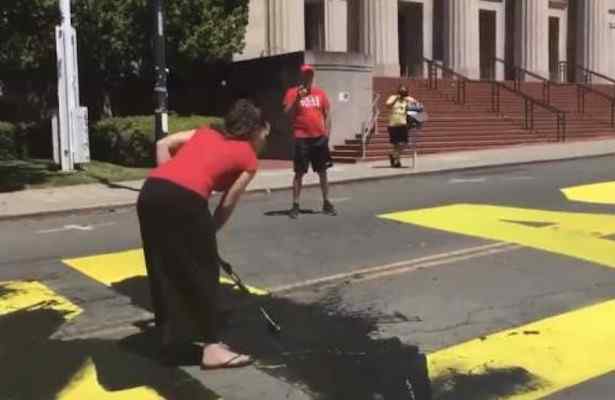 (Gateway Pundit) – A couple in Martinez, California, peacefully painted over the city-sanctioned giant yellow “Black Lives Matter” lettering in the middle of the road on the Fourth of July.

Police are now looking for the couple, likely harder than they are searching for the terrorists who ripped down statues, looted shops, and destroyed large chunks of cities across the nation.

He explained that he believed the giant Black Lives Matter state-sanctioned vandalism is itself racism.

“There is no oppression. There is no racism,” he said. “It’s a leftist lie.”

As the man filmed the people gathering, the woman bravely painted over the massive yellow letters with a roller of black paint.

“Keep this sh-t in f-cking New York, this is not happening in my town,” the woman yelled at someone who was calling the couple racist for their peaceful demonstration.

“The community spent a considerable amount of time putting the mural together only to have it painted over in a hateful and senseless manner,” Martinez Police Chief Manjit Sappal said in a press release on Sunday. “The City of Martinez values tolerance and the damage to the mural was divisive and hurtful.”