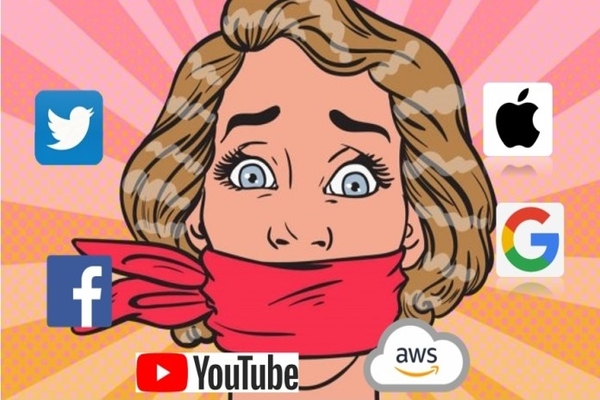 (breitbart) – Catholic League president Bill Donohue said Monday that Big Tech’s censoring of Parler is “the most serious assault on freedom of speech we have ever seen by private companies in American history.”

Amazon, Google, and Apple are not silencing those who actually promote violence but rather “conservative voices in general,” Dr. Donohue notes.

More generally, the left is attempting to use last Wednesday’s riots as an excuse to pillory the 74 million Americans who voted for Donald Trump, Donohue suggests, rather than punishing the actual perpetrators of the violence.

“They are a true menace to democracy: they are using Trump as a pretext to stifle the free speech of decent Americans,” he states.

The storming of the Capitol building is also being irresponsibly exploited by those on the left to specifically indict Christians, Donohue observes.

The Atlantic described the incident “a Christian insurrection” while Religion News Service called it the work of “Christian nationalists,” Donohue writes. Meanwhile, both Patheos and Americans United for Separation of Church and State blamed “White Christian Nationalists” for the violence.

For its part, the left-wing National Catholic Reporter said that Catholics who ever supported Trump’s policies (including Donohue) have “blood on their hands,” a claim that Donohue calls “delirious.”

Anyone who actually looks at the facts knows that Trump “never incited a riot,” Donohue argues. “Nothing President Trump said last week was in any way an incitement to violence. Indeed, it was protected speech under the First Amendment” as laid down by the U.S. Supreme Court.

In its rulings on the matter, the Court has been clear that “those who riot are to blame for their behavior, not the speaker whom they loathe.”

Citing Justice Oliver Wendell Holmes, Donohue notes that the standard for inciting violence requires that the words used “create a clear and present danger that they will bring about the substantive evils that Congress has a right to prevent.”

“What Trump said to his followers last week cannot, by these constitutional standards, be construed as an incitement to violence,” Donohue notes. “Never once did he call for violence or an invasion of the Capitol.”