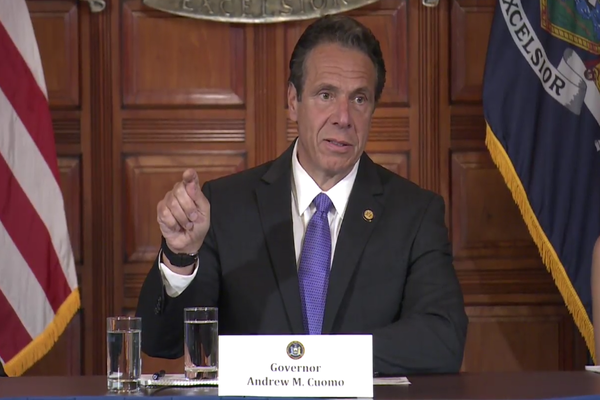 (breitbart) – Law enforcement will be “out in-force” as the holidays approach, stopping vehicles at certain New York City checkpoints, and there will be “consequences” for violating quarantine requirements, Sheriff Joseph Fucito said on Tuesday.

“Sheriff teams will be out in-force as the holidays approach. There will be vehicle checkpoints at key bridges and crossings throughout New York City,” Fucito announced during a Tuesday press conference alongside Mayor Bill de Blasio (D).

“Sheriff will also be conducting checkpoints at curbside drop off bus stops – so, out-of-state buses coming into New York City, when they drop off at the curb, they will be met by sheriff teams,” he said, explaining that they will also be “serving Department of Health general orders for travelers arriving in New York, advising him of the quarantine and what they have to do in order to comply with the quarantine.”

While neighboring state travelers are exempt from the travel advisory, others are expected to “obtain a test within three days of departure, prior to arrival in New York,” quarantine for three days, and obtain another coronavirus test on the fourth day.

“If both tests comes back negative, the traveler may exit quarantine early upon receipt of the second negative diagnostic test,” according to the state’s travel advisory.

Fucito warned that “there will be consequences” for violating the 14-day travel quarantine.

“Violation of a self-quarantine travel regulation may result in deputy sheriffs serving you a mandatory quarantine order issued by the Health Commissioner. In cases of violation, Deputies could serve you with a civil summons that carries a $1,000 fine,” he said, although he emphasized that officers will be focusing primarily on large gatherings:

As a practical matter, and as the Mayor stated previously, the Sheriff’s Office would be concentrating on large-scale gatherings. Our actions in the last several months have reinforced this point. Deputy sheriffs are investigating massive events that violate a panoply of criminal, fire, building, health and other regulatory laws at locations such as illegal fight clubs, underground raves, and illegal gambling dens. These activities were illegal and sometimes deadly before COVID-19, and the public safety hazards regarding them have been amplified exponentially by the pandemic.

“In a city of 8.3 million people, the best and most pragmatic method for deputy sheriffs to save lives is to maximize enforcement at these types of dangerous gatherings,” he added.

Under Gov. Andrew Cuomo’s (D) orders, gatherings that exceed ten individuals, even in private homes, are prohibited. Nonessential gatherings of “any size” are not permitted in areas that are considered in a coronavirus “red” zone.

“The rules are only as good as the enforcement. Local governments are in charge of enforcement. There are only two fundamental truths in this situation: it’s individual discipline and it’s government enforcement. Period. End of sentence,” Cuomo said at the time of the announcement earlier this month.

“I need the local governments to enforce this,” he added.

Some county sheriffs, however, have signaled that they will not enforce the governor’s edicts, including Fulton County Sheriff Richard Giardino and Erie County Sheriff Timothy B. Howard.