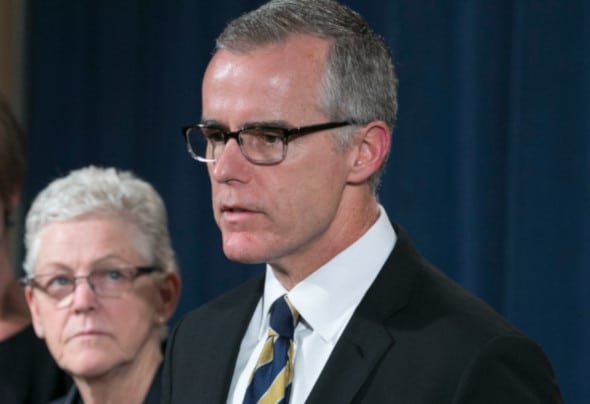 (Gateway Pundit) – The Department of Justice on Friday announced it has dropped its criminal investigation of Former FBI Deputy Director Andrew McCabe.

His lawyers made the announcement on Friday morning.

Andrew McCabe leaked confidential investigation details and information to the media to “advance his personal interests” then lied about it to the Inspector General.

The Inspector General released a scathing report on McCabe in April 2018 stating he “lacked candor” following his illegal media leaks.

Only Republicans get convicted of crimes in today’s Justice system.

McCabe’s attorneys told reporters this morning, “We are pleased that Andrew McCabe and his family can go on with their lives without this cloud hanging over them.”

The Department of Justice has dropped its criminal investigation against former FBI Deputy Director Andrew McCabe, his lawyers said in a statement Friday. McCabe was a frequent target of President Donald Trump, who blamed the former official for what he has called a baseless investigation into whether the Trump campaign conspired with Russians to affect the outcome of the 2016 presidential election. “We learned this morning through a phone call from the D.C. U.S. Attorney’s Office that was followed by a letter that the Justice Department’s criminal investigation of Andrew McCabe has been closed,” attorneys Michael Bromwich and David Schertler said in the statement. “This means that no charges will be brought against him based on the facts underlying the Office of the Inspector General’s April 2018 report.” “At long last, justice has been done in this matter. We said at the outset of the criminal investigation, almost two years ago, that if the facts and the law determined the result, no charges would be brought,” they said.