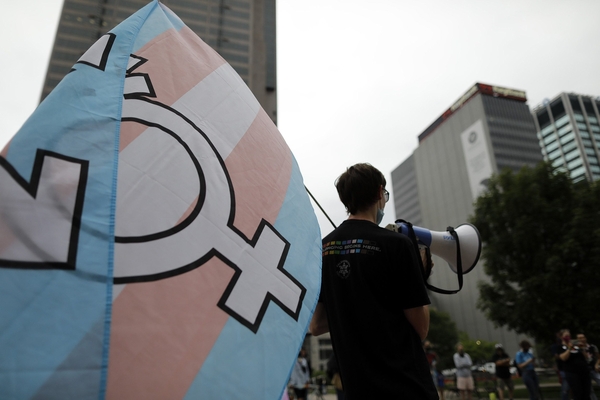 (breitbart) – Advocates for the transgender ideology are admitting they cannot persuade their own progressive allies, or even “persuadable” swing voters, to back their revolutionary goal of suppressing Americans’ recognition of sex differences.

“Right now, our opposition wins the debate on trans youth in sports against any and all arguments we have tried for our side,” admits a “Messaging Guide” by the California-based Transgender Law Center.

Overall, “we can at best elicit sympathy, a passive and often patronizing attitude that alienates our base [of current supporters] and fails to generate sustained interest from persuadable audiences” of swing voters, said the guide, which is titled “Transgender Youth and the Freedom to Be Ourselves.”

The counter-strategy is to stealthily hook their aggressive ideology to the public’s existing sympathy for poor people, women, and racial minorities, according to the messaging guide:

…the Race Class Narrative to tell a convincing story of how our opposition uses strategic racism and transphobia to harm us all; and how, by coming together, we can ensure we all have the freedom to be ourselves and support one another.

The soft-focus, stealthy strategy is already being implemented by pro-transgender activists and allies in the media.

For example, the Washington Post is sympathetically portraying a man who is being allowed by the executives in the TV quiz show Jeopardy! to claim and break womens’ records.

A December 2 article featured the man coyly posing while wearing pearls and a print blouse and said:

During an episode last week, she wore a transgender flag pin and explained on Twitter that she specifically wore it around Thanksgiving because she wanted to show support for the “disproportionately high number of trans people” who are estranged or cut off from their families.

Another December 29 article also misidentified the man as a woman and even pushed mention of his “trans[gender]” claim to the second-to-last paragraph, after 696 words of soft-focus coverage. That article was written by Reis Thebault, a graduate of the University of California at Berkeley’s Graduate School of Journalism.

A sympathetic article in TheDailyBeast.com reported:

Schneider said top brass at the show’s parent company, Sony, put her in touch with GLAAD’s Nick Adams, the director of transgender representation for the media advocacy organization, to provide guidance in dealing with those kinds of engagements. That advice is: don’t engage.

“I’ve been doing my very best not to engage and just block and ignore it. Once, however, somebody had just posted this long thing about how ‘Thinking you’re a woman is just a psychological delusion, not an identity.’ And I said, ‘Counterpoint. No, it’s not.’ And then blocked him because that was the one time I’ve given in to that temptation.”

Similarly, Lia Thomas, the man who is being allowed by Ivy League administrators to grab the prizes and status of women swimmers, is also trying to minimize debate over his claims.

“It’s not healthy for me to read [criticism] and engage with it at all, and so I don’t, and that’s all I’ll say on that,” Thomas told a sympathetic writer — Jo Yurcaba — at NBC’s pro-transgender site, NBC Out.

The stealth strategy is partially successful. The Washington Post and the New York Times have not mentioned the Jeopardy! or the Ivy League sex scandals.

In general, transgender activists demand that a person’s sense of their male-or-female nature — their “gender” — should be more important in law and society than the male-or-female nature of their unchangeable, complementary biologies. But the cruel agenda imposes costly civic conflicts on the public, and especially on the people who try to change their sex. Those personal costs include near-universal sexual rejection, social isolation, and medical traumas.

Unsurprisingly, many polls show that the public is increasingly dismissive of the progressives’ unpopular demand that ordinary Americans pretend they cannot see the fundamental differences between the two complementary male-or-female sexes.

For example, a December 21-22 poll of 1,000 adults by Rasmussen Reports showed that only nine percent of Americans strongly disagree that “There are two genders, male and female.”

Just 28 percent of people say there are “more than two genders,” according to an October 2021 Harvard/Harris poll.

The advocates’ messaging guide admits the public rejects their demands, even when the advocates hide the scientific evidence of human heterosexuality and the multiplying reports of medical damage, professional corruption, personal traumas, manipulative grooming, and social rejection. The guide says:

Unfortunately, our focus groups echoed past research in finding concerningly low connection to, understanding of, and familiarity with transgender people in the U.S., including among our traditional progressive base. Even where people expressed support, it was for a category of people they clearly perceived as wholly separate from and unrelated to their own lives. The implicit and occasionally explicit line people drew between their own communities and transgender people frequently had a racial dimension, with comments indicating many participants largely associated being transgender with being white, or associated acceptance of transgender people with whiteness.

Getting the public to accept transgender intrusion into women’s sports is especially difficult, the report notes:

First, people primarily understand sports through the individualistic lens of competition, where if one person wins then another, by definition, loses. Entrenched in this zerosum framework, people resist and dismiss our calls for sports policies that benefit our collective good, the core of a Race Class Gender Narrative.

Second, opposition rhetoric on sports is more directly transphobic and dehumanizing than their discourse on other issues. With bathrooms or schools broadly, for example, our opposition often tries to claim some degree of sympathy for transgender people and win over persuadables with coded language, “slippery slope” arguments, and dog whistles about bad actors pretending to be trans in order to “take advantage” of nondiscrimination policies. There is far less buffer in their attacks around sports, where they use the physicality of the issue to directly spout dehumanizing stereotypes about transgender women and girls.

So the guide offered poll-tested scripts for selling the transgender message:

Whether we are Black, white or brown, Native or newcomer, transgender or not, we want the freedom to be ourselves. But some people try to get and hold onto power by putting us in boxes based on what we look like, where we’re from, or our genders. We see this in how schools tell Black kids how to keep their hair or send girls home for the clothes they wear …  By joining together, we can make this a place where we are all free to thrive and support each other for who we are.
…

Across our races, backgrounds and genders, we want to be treated with dignity and respect. But today, certain politicians are pushing laws that restrict our freedoms because of the color of our skin, what’s in our wallets, or because we are transgender. They exploit divisions and fears among us

Young people across time, race, and movements for equality have always helped lead the way …  Now it’s our time to show up, reject division, and chart a better future for all of us, no matter our ages, races, or genders

But humanity’s evolved male-or-female human nature is obvious to nearly all humans, especially in matters of romance, sports, and culture.

It can come through when men who claim to be women speak freely. For example, in a late-December interview with a pro-transgender group, Schneider was asked:

Q. If you could only choose one movie to watch on repeat for the rest of time, what would it be?

A. It would be very possible that it would be the movie, Master and Commander: The Far Side of the World. I’ve always loved like Napoleonic sailing ship stuff, and like Horatio Hornblower [book], things like that, and it was just everything I wanted it was so good.

The feminine claims of men also can slip under pressure:

Most feminists and conservatives say that men and women cannot be limited to stereotypical behavior of their own sex. For example, they argue that society and government must allow women the freedom to adopt stereotypically male careers — chopping trees or welding underwater pipes — and that men have the freedom to try to be fashion designers or ballet dancers.

But unlike the progressives, these conservatives and feminists also argue that career choices and personal behavior do not influence a person’s sex — that a man does not become a part-woman when he wears a dress or becomes a nurse, and a girl does not become a quasi-boy when she is a lesbian or prefers contact sports.

Nationwide, fewer than one percent of people describe themselves as transgender, and less than ten percent undergo cosmetic surgery of the genitalia.

The transgender movement is diverse, with competing goals and priorities.

The movement includes masculine autogynephilic men who demand sex from lesbians, non-political people trying to live as idealized stereotypes of the opposite sex, and pre-pubescent children with childish views of sexuality and children being protected by their parents.

It includes troubled young men who imagine themselves as promiscuous women, lesbians trying to become men, troubled teenage girls trying to flee a toxic sexual atmosphere, gay teenagers who are pushed towards an attempted transgender identity, and young people trying to “de-transition” back to their sex.

It also includes sexual liberationists and many progressives who are eager to liberate people from their bodies, plus parents who are eager or willing to endorse transgender claims, and journalists eager to help their social peers.