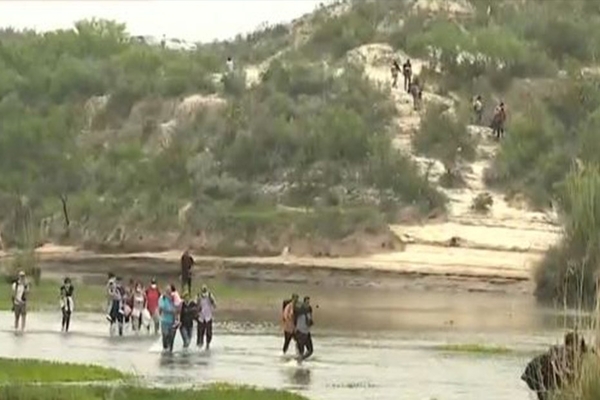 (breitbart) – President Joe Biden makes his first-ever visit to the Texas-Mexico border on Sunday. However, circumstances in El Paso are vastly different this week compared to the humanitarian disaster just weeks earlier.

The Biden administration’s border and immigration policies left the city of El Paso in a state of disaster during the month of December. Following Mayor Oscar Leeser’s disaster declaration and the deployment of the Texas National Guard, conditions in the region are now much different. Here are five things President Biden won’t see after actions taken by Texans:

1: Massive Numbers of Migrants Crossing the Border from Mexico to El Paso

During the month of December, El Paso Sector Border Patrol agents apprehended nearly 56,000 migrants — more than 1,800 per day. That brought the total during the past four months alone to nearly 209,000 migrants. At its peak, nearly 7,400 migrants crossed the border into El Paso over a single weekend — nearly 11,000 in a single week.

2: A Wide-Open Border in El Paso

During the months leading up to Biden’s first-ever border visit, migrants freely walked across the Rio Grande by the thousands. Following Mayor Leeser’s disaster declaration, Texas Governor Greg Abbott ordered the Texas National Guard to the city of El Paso to close off the wide-open crossing areas.

In the following days, the Texas Division of Emergency Management began stacking shipping containers along the border to fill in gaps.

3: Overcrowded Border Patrol Processing Centers and shelters
In December, the El Paso Sector centralized migrant processing center, designed to hold approximately 3,000 migrants, grew to a population of well over 5,600 migrants, according to the El Paso Migrant Crisis Dashboard operated by the City of El Paso.

This forced the release of more than 10,000 migrants to local NGO shelters and onto the city’s streets as a polar vortex approached. During a four-week period, Border Patrol officials were forced to release nearly 31,000 migrants to El Paso, the dashboard reports.

On Sunday, as President Biden visits El Paso, the Border Patrol center is holding only 978 migrants — down from nearly 6,000 in December, according to the dashboard. The release of migrants into El Paso fell from a peak of nearly 1,500 per day to 327 per day.

4: Migrants Sleeping on Streets in Freezing Conditions
The release of migrants onto the streets of El Paso and overcrowded shelters left thousands of migrants sleeping outdoors in freezing conditions over the Christmas weekend.

The City of El Paso struggled to find additional shelter space as the life-threatening polar vortex descended on the region.

Despite the life-threatening weather conditions, the Biden administration blocked many Venezuelan and other “undocumented migrants” from entering federally funded shelters.

In the days leading up to President Biden’s visit to El Paso, local police and Border Patrol agents began to clean up the streets by arresting hundreds of Venezuelan migrants camped out near churches, shelters, and bus stations, the El Paso Times reported.

“Hundreds of Venezuelans, faced with expulsion to Mexico, crossed into El Paso without turning themselves in to border agents,” the local newspaper stated. “Many were camped on city streets, hopeful they’ll be allowed to remain in the country. Border Patrol made dozens of arrests last week.”

El Paso Matters reported: “The sounds of crowds of people talking, crying, laughing and praying around the streets of Downtown El Paso were silenced overnight Wednesday as U.S. Border Patrol agents swept up large crowds of migrants near the Greyhound bus terminal.”

It is not known what President Biden will see when he visits the border in El Paso on Sunday. The White House did not disclose in advance who the president will meet with and what he plans to visit during the border trip.

The New York Times stated that Biden’s visit to El Paso “is bound to be awkward. Governor Abbott, who’s actions helped slow the migrant crisis in El Paso, has not announced any plans to meet with the president.

What is clear is the El Paso President Biden Visits on January 8 is much different than the El Paso of just two weeks ago.