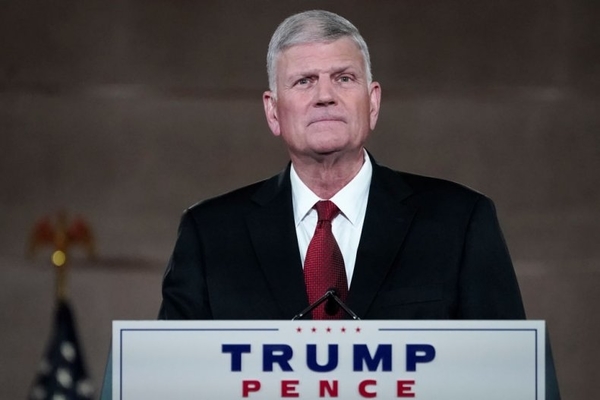 (breitbart) – A left-wing group that claims to represent true Christian values launched a petition on Saturday asking for evangelical leader Franklin Graham to lose his job because he supported President Donald Trump.

Faithful America cited Graham’s social media post that said he tends to believe there was fraud in the 2020 election and also his comments on Republicans that voted for Trump to be impeached a second time.

On Wednesday the petition from Faithful America, an organization that also targeted the Christian groups Family Research Council and World Vision for taking a stance on traditional marriage, has garnered about 20,000 signatures.

Text on the petition web page cites the attack of the U.S. Capitol:

As for the violence that left five dead, the court evangelical simply shrugged it off: “We knew he had flaws when he ran for office in 2016.” There is absolutely nothing Christian about that.

With blasphemous preachers like Graham blessing Trump’s Big Lie and pretending “antifa” was behind the attack, it’s no wonder the failed coup featured crosses and “Jesus saves” banners and flags. Graham and the religious right must be held accountable for their deadly dishonesty.

Graham gets away with his hatred and conspiracy-theories by hiding behind the humanitarian work of Samaritan’s Purse and his late father’s name. It’s time for Samaritan’s Purse and the Billy Graham Evangelistic Association (BGEA) to realize that by propping up Franklin’s unchristian extremism, they are abandoning their Gospel missions, undermining democracy, and helping incite white-nationalist sedition.

The petition says, in part:

As long as Samaritan’s Purse and the Billy Graham Evangelistic Association stand by Franklin Graham, it must be said that these once-vaunted organizations have forgotten their original Christian missions, abandoned the Gospel of Jesus Christ, and are complicit in the spread of dishonest, discredited election conspiracy theories and the deadly, unpatriotic, white-nationalist terrorism at the U.S. Capitol incited by those lies.

Our faith in Jesus Christ demands that we do better than this. Your fellow Christians from across the country call on you to fire Franklin Graham, or to resign from the Board in individual protest.

The Raleigh News and Observer reported on the response to the petition from Samaritan’s Purse and the Billy Graham Evangelistic Association:

Paul Saber, who serves on the board of directors for both organizations, told McClatchy News in a statement Tuesday that Faithful America “fabricated this lie that (Graham) incited violence at the Capitol.”

“The Boards of Directors for Samaritan’s Purse and the Billy Graham Evangelistic Association have expressed that they fully support Franklin Graham and are more than satisfied with the job he has done and is doing in leading these ministries,” Saber said. “Franklin Graham was not in Washington, D.C., and he did not encourage people to go to the Capitol on January 6.”