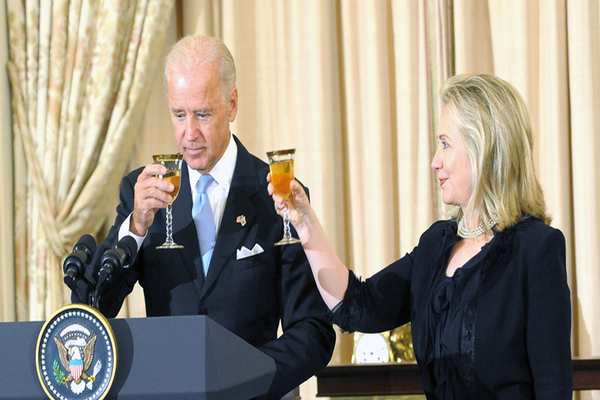 (bigleaguepolitics) – Failed presidential candidate Hillary Clinton is urging Joe Biden to be a sore loser and make the election in November as grueling and agonizing as it can be.

Clinton does not believe that Biden should do what’s best for the country. If he is losing on election night, she implores him to keep the fight going even if it means tearing the nation apart at its seams.

“Joe Biden should not concede under any circumstances because I think this is going to drag out, and eventually, I do believe he will win if we don’t give an inch and if we are as focused and relentless as the other side is,” Clinton said during an appearance on Showtime’s The Circus.

She is floating conspiracy theories about Republicans potentially stealing the vote as the pretext to delegitimize the election results in case Trump defeats Biden.

“I think that [Republicans] have a couple of scenarios that they are looking toward. One is messing up absentee balloting. They believe that helps them so that they then get maybe a narrow advantage in the Electoral College on Election Day. … So we’ve got to have a massive legal operation, and I know the Biden campaign is working on that,” Clinton said.

“We have to have poll workers, and I urge people who are able to be a poll worker. We have to have our own teams of people to counter the force of intimidation that the Republicans and Trump are going to put outside polling places. This is a big organizational challenge, but at least we know more about what they are going to do,” she added.

Clinton’s comments can be seen here:

Big League Politics has reported on the many problems that have already emerged this year due to the expansion of mail-in voting:

Three New Jersey Democrat politicians are being charged with fraud relating to a mail-in voting scam that allegedly happened as a result of the COVID-19 pandemic.

The charges have been filed against a city councilman, a councilman-elect, the brother of another councilman, and a fourth individual for election fraud in May’s special election. The entire election was conducted via mail-in voting due to fears related to the coronavirus.

NJ 1st Ward Councilman Michael Jackson is accused of collecting mail-in ballots and giving them to the Passaic County Board of Elections without indicating that he was the official bearer with his signature. Prosecutors also allege that Jackson handed in at least one ballot before it had been properly filled out.

Jackson won re-election with 844 votes while his opponents received 599 and 490 votes, respectively. Mendez won his post with 1,595 votes with his nearest competition receiving 1,350 votes.

The U.S. Postal Inspection Service became aware of the alleged scam when they found several hundred mail-in ballots that were “bundled” in a mailbox in Paterson, with hundreds of other ballots found in a different mailbox in nearby Haledon. Overall, there were at least 800 ballots implicated in the alleged scam. This was enough to potentially influence the results of last month’s elections.

Other instances of alleged fraud were reportedly a family affair. Shelim Khalique, a 51-year-old Wayne resident, whose councilman brother, Shahim Khalique, won by just a few votes as a candidate in the 2nd Ward, is accused of illegally collecting and delivering mail-in ballots as well. Khalique is also facing charges of illegally employing a sex offender for his transportation company and hiring school bus drivers without qualifications.

Another suspect Abu Razyen, 21, of Prospect Park, has been taken into custody and charged with mishandling ballots as well.

The Democrats are once again playing by the handbook of Satan-worshiping community organizer Saul Alinsky, who wrote in his Rules for Radicals to “accuse your opponent of what you are doing, to create confusion and to inculcate voters against evidence of your own guilt.”