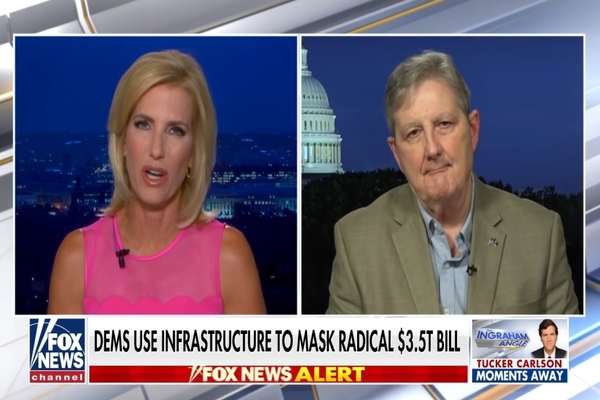 (breitbart) – Monday on FNC’s “The Ingraham Angle,” Sen. John Kennedy (R-LA) criticized the so-called bipartisan effort in the U.S. Senate to pass what has been deemed an infrastructure bill.

The Louisiana Republican lawmaker took issue with it being deemed “infrastructure.”

Well, I can just share with you my perspective, Laura,” he said. “Early on, I was a likely yes, on this bill. I mean, who’s not for infrastructure? I’m for children and prosperity too. But then I got a copy of the bill. And I realized pretty quickly that if you look up ‘stupid stuff’ in the dictionary, there’s a picture of this bill. They told us it was a real infrastructure bill. It’s not. Only 23% of the bill is real infrastructure. The rest is Green New Deal and welfare. They told us the bill was paid for. It isn’t. We’re going to have to borrow maybe up to $400 billion to pay for it.”

“They told us there was no – there were no tax increases,” Kennedy continued. “There are. My state’s going to have to pay $1.3 billion, in new taxes, on our petrochemical industry. They told us, as you pointed out, that the Democrats were really wary of this bill, and then it would, if we pass this bill, it would make it harder for them to pass their $5 trillion tax and spending binge reconciliation bill. Well, if that’s true, how come every Democrat voted for this infrastructure bill? And finally, they told us that it’s not going to add to inflation. But it will.”