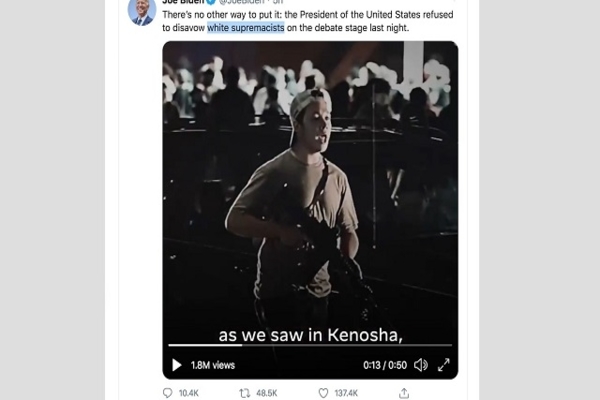 (informationliberation) – Famed attorney L Lin Wood, who organized Kyle Rittenhouse’s legal defense team, announced Wednesday he intends to sue Joe Biden and his campaign for libel for smearing his client as a “white supremacist” in a shameful new propaganda ad.

Lin Wood, Rittenhouse’s civil attorney, confirmed to Fox News on Wednesday his intention to sue the former vice president and his campaign on his client’s behalf, just hours after Biden posted the 50-second clip to Twitter.

The tweet, which had garnered more than 48,000 retweets and 148,000 likes by 2:35 p.m. EST, boasts the caption: “There’s no other way to put it: the President of the United States refused to disavow white supremacists on the debate stage last night.”

[…] After Biden’s video was released on Wednesday, Wood announced his intention to sue and demanded a retraction.

“He falsely accused a 17-year old boy & prejudiced Kyle’s legal rights,” he wrote in one of a series of tweets.Wood went on a Tweetstorm slamming Biden and his campaign:

They want everyone thinking about one event in Charlottesville 3 years ago after we’ve just experienced 3 months of non-stop rioting, looting, murder, arson, statue toppling and multiple mob attacks on drivers forced to flee in self-defense.

The 2020 BLM riots are officially the most damaging riots in U.S. history.

Americans are learning how antifa operates and they’re seeing through Biden and the media’s bulls*** lies that antifa is just an “idea” and not an organization.