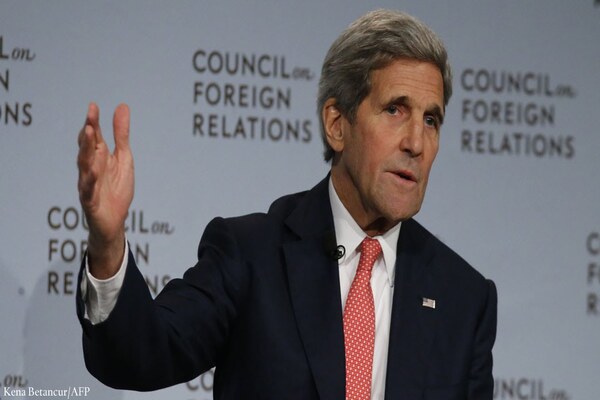 “I am not convinced we’re going to get there in time to do what the scientists said, which is avoid the worst consequences of the crisis,” he said, promoting a “no-carbon” future to prevent global temperatures from rising.

Kerry gloomily noted to the Davos elites that despite recent global entities pledging to be carbon neutral by 2050, there was not enough progress.

“You and I, we know, they don’t have a clue how they’re going to get there,” he said. “And most of them aren’t on track to get there.”

Kerry blamed the flooding in California as a consequence of climate change.

“On the one hand, the destruction is unfathomable flooding that’s just amazing, not just California, but Nigeria, Uganda … other places.”

He noted that the pledges for carbon-neutral entities were encouraging but that too many were not fulfilling those promises.

“We’re not doing everything we promised, nobody,” he said.

He bemoaned the ongoing environmental consequences of climate change noting that “half the species of the planet have already been killed.”

Kerry lectured business CEOs for failing to recognize the “destructive process of growth” which he described as “not as enlightened growth but as robber baron growth.”

But at the beginning of his remarks, he praised the group that had gathered in Davos to work on the issue.

“It’s so almost extraterrestrial, to think about quote ‘saving the planet,’” he mused.

“If you said that to most people, most people they think you’re just a crazy lefty liberal you know do-gooder whatever and there’s no relationship,” he continued.