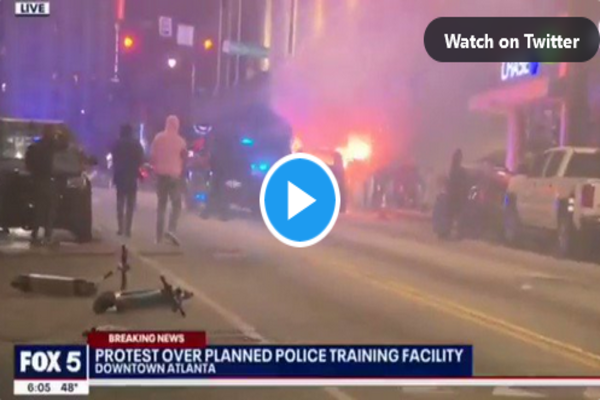 The protest reportedly began as a “mostly peaceful” demonstration in response to the death of 26-year-old activist Manuel Teran, who was killed during a police sweep on Wedneday “in what the Georgia Bureau of Investigation said was an exchange of gunfire with police that wounded a state trooper,” according to the Atlanta Journal-Constitution (AJC). The trooper remains unidentified and is reportedly in stable condition after being taken to a hospital for surgery.

Prior to the rioting, protesters chanted, “No justice, no peace, no killer police” and “Stop cop city,” which refers to the name of the Atlanta police training site.

“They also chanted ‘stop police terror,’ ‘free the activists,’ and ‘drop the charges,’ referring to how at least seven other people have been arrested and charged with domestic terrorism in connection with Wednesday’s law enforcement operation in the southern DeKalb woods,” noted the AJC.

One person attempted to also chant, “If they build it, we will burn it,” in reference to the city’s plans to “build a training center for police and firefighters within several acres of forested land in DeKalb County.”

The protest eventually turned violent, with a police car being set aflame while businesses were broken into. Police responded to multiple instances of property damage along Peachtree Street. The Atlanta Police Foundation also had its glass doors smashed in.

“Several arrests have been made at this time and order has been restored to the downtown space. This is still an active and ongoing investigation and we will not be able to provide specifics on arrests numbers or property damaged, at this time,” the Atlanta Police Department told reporters.

Mayor Andre Dickens also said at a police conference, “Thanks for the quick action of our public safety officials working together, order has been restored in a swift manner.”

“The city of Atlanta and the Atlanta Police Department will not, will not tolerate this and we continue to protect the right to peacefully protest. We will not tolerate violence or property destruction,” he added.