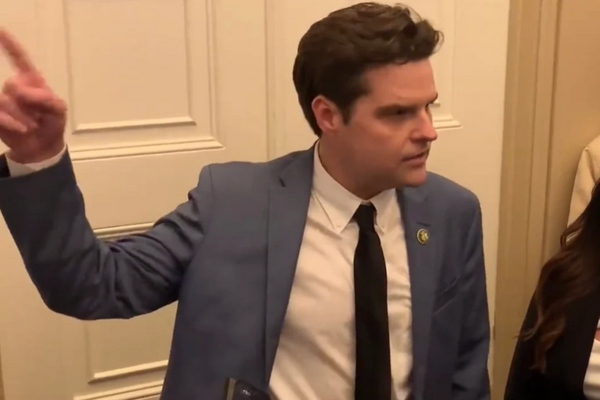 (thegatewaypundit) – After two days of brutal losses, Kevin McCarthy (R-CA 20th District) was huddling with his detractors in a closed-door meeting, according to Punchbowl News.

It is unclear who exactly is in the closed-door meeting.

McCarthy entered a meeting through a back door with several of his high-profile GOP detractors.

“He’s a desperate guy whose vote share is dropping with every subsequent vote and I’m ready to vote all night, all week, all month, and never for that person,” Rep. Gaetz told reporters.

Watch the video below:

“So I tell you what, when he comes out and heads back to his squatting in the speaker’s office, which why is he going to be allowed to be there? Like, is there some basis in law or statute or rule for someone who comes in second place and 6th consecutive speaker races to be able to assume in the speaker’s office?” Gaetz continued.

It can be recalled on Tuesday, Gaetz demanded answers from the Architect of the Capitol as to why McCarthy was allowed to occupy the Speaker of the House Office in the Capitol.

Earlier on Wednesday, shortly after President Trump shared his support again for McCarthy, Rep. Matt Gaetz tweeted his response to the President’s action.

“Supporting McCarthy is the worst Human Resources decision President Trump has ever made. Sad!” he said.

This was a bold tweet from Gaetz but many Americans agree with him. President Trump’s actions in supporting McCarthy do not bring him closer to the Trump base. Americans want new leadership not more of the same.