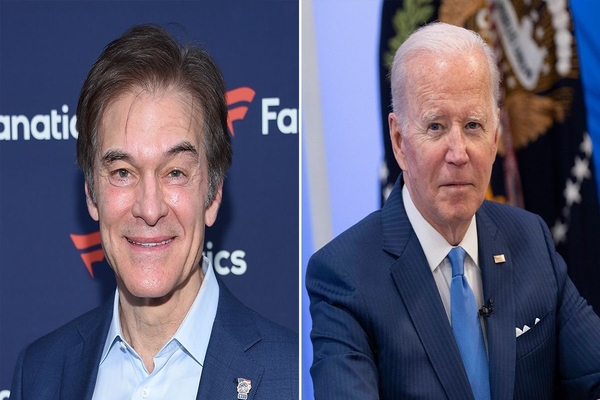 Hamparian appeared on an episode of Breitbart News Saturday, hosted by Breitbart News political editor Matthew Boyle, and talked about how Oz’s connections to Turkey would impact his performance if elected to the U.S. Senate in November.

Boyle opened the interview by discussing the recent letter ANCA sent to the U.S. Department of Justice that alleges Oz violated the Foreign Agents Registration Act (FARA) by failing to register for his work with Turkish Airlines.

Hamparian explained that because the Turkish government directly controls a near majority of the company, Oz likely should have registered as a foreign agent.

“It’s an increasingly hostile Turkish government run by a very angry dictator, Recep Erdogan, and Mehmet Oz is representing their airlines,” Hamparian said. “It’s like 49 plus percent owned directly by the government, but the rest of is controlled by the government. And he needs to register as a foreign agent and the Department of Justice needs to look into that.”

Boyle noted that former DOJ official David Kaufman, who was in charge of the department’s FARA enforcement division, said it would be “appropriate” for the DOJ to investigate whether Oz violated an obligation to register under FARA.

Hamparian said that the combination of Oz’s endorsement deal with Turkish Airlines, his Turkish real estate portfolio, and his vote in Turkey’s most recent elections should warrant a federal investigation.

“This is not like just an isolated ad that he might run for Turkish Airlines. This is part of a very comprehensive pattern of activity that raises serious questions,” Hamparian said.

Hamparian believes Pennsylvania Republican voters need to know about Oz’s Turkish ties and whether he should have registered under FARA before the GOP Senate primary occurs on May 17.

“So in a sense, the voters of Pennsylvania will be the ones who decide, does Dr. Oz get a U.S. security clearance? If he gets elected he’ll have access to all the classified material he might like to have, and that is a decision for the voters to make,” he said. “But they can’t make an informed decision unless this all this stuff is aired off before the day of the primary.”

Boyle then brought up the recently resurfaced photo that showed Oz casting a ballot in the 2018 Turkish presidential election and asked Hamparian to talk about the significance of Oz’s vote in terms of his Senate candidacy.

Hamparian pointed out that Oz has consistently claimed to have no political involvement in Turkey.

It really is something, and so there’s two aspects. One is voting in a Turkish election, But missing U.S. elections. So time, effort and focus for a Turkish candidate, potentially Recep Ergodan, this anti-American dictator. And then, on top of that, he has said many times publicly, “I have had no political involvement in Turkey.” Well, voting is the very definition of political environment. That’s political involvement. So it goes against what he said. And also compare and contrast between voting in a Turkish election, plenty of time for that, and no time to vote in U.S. elections.

Hamparian went on to talk about Oz’s Turkish citizenship, which he pledged to revoke if elected to the Senate after previously claiming he would maintain it.

Hamparian said Oz’s Turkish citizenship raises questions about what leverage Turkey might hold over a U.S. Senator if he gets elected.

It’s a question of what leverage would this foreign power have over a U.S. senator. If he’s nervous about surrendering his Turkish citizenship because of some legal issues he has back home or some other issues, that is evidence in and of itself that Turkey has leverage over him. They certainly have leverage over whether or not Turkish Airlines pays him millions of dollars. He’s apparently involved in lawsuits related to his family, that the Turkish courts are controlled by the government. So they have leveraged in that way as well. Apparently, he has business dealings with various ministries in Turkey, and they have leverage over him in that way as well.

I think we all make choices in life, and then we live with the consequences of those choices. So he decided, as he said, to maintain his Turkish citizenship, but he also chose to serve in the army of a foreign government. And that’s the path he chose. But then to say, I get to do that, I get to take an oath to the military of a foreign power, and then also ask the citizens of Pennsylvania to trust me to advance their interests to put Pennsylvania first but America first, the two simply they’re at odds. They’re two very, very different paths.

“He wants to be able to remain, I guess, pledged his allegiance to a foreign power, and then expect Americans to believe that he’s putting America first still really very different things,” Hamparian added.

Hamparian also commented on Oz’s reluctance to recognize the Armenian Genocide, even though U.S. politicians and scholars overwhelmingly do so. In 2019, the U.S. Senate unanimously voted to recognize the genocide, but Hamparian said it would roll back the Senate’s united front with Oz in office.

“So but the thing is this right, why doesn’t he recognize the Armenian Genocide?” Hamparian asked.

“And the only conclusion I can come to was something like he’s got some relationships in Turkey, financial or otherwise. And they have leverage, and in turn over him,” Hamparian said. “And if he were to to simply say the words ‘Armenian Genocide,’ then Turkey would use that leverage to somehow punish him or hurt him, or compromise his legal issues or financial issues.”