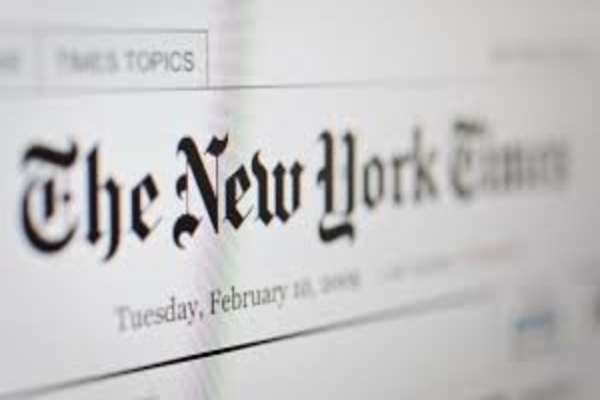 (breitbart) – The New York Times casually mentioned in an article published Wednesday that the Laptop from Hell is authentic — after calling the original New York Post report “baroque mythology” at the time it was published — but the “Paper of Record” should not get away with obscuring its own record of deceit on this story.

The Times is just the latest among a series of left-wing activist outlets to tacitly come clean about the lies it spread in October 2020, coming around almost two years later to “confirm” what we all already knew — that my original reporting on the laptop and its contents was accurate and true — but stopping just short of taking responsibility for its own role in spreading “disinformation” about a critical story in the run-up to a presidential election.

Days after the Post published the Laptop from Hell series, the Times published a surreal column on October 23, by James Poniewozik, calling then-President Trump a “Fox superfan” for quoting the report in the presidential debate and the contents of the report itself “questionable” and “unverified.”

The Times published another column by Ross Douthat, on October 27, 2020, explicitly describing how the paper worked to ignore the substance of the story as part of covering it in a “cautious fashion,” even after Hunter’s business associate, Tony Bobulinski, came out on the record to confirm Joe Biden’s cut in their deals.

“[T]his newspaper covered the story in a dry and cautious fashion, describing the Bobulinski allegations while also stressing the lack of definite evidence of the former vice president’s involvement in any deal,” Douthat wrote for the Times.

Then, almost a year later, in September 2021, the Times published and then stealthily deleted the word “unsubstantiated” to describe the Post’s report.

Now, the paper is trying to pretend all of that just didn’t happen — burying in paragraph 24 of a multiple-byline piece the scandal-scarred Biden’s legal woes:

People familiar with the investigation said prosecutors had examined emails between Mr. Biden, Mr. Archer and others about Burisma and other foreign business activity. Those emails were obtained by The New York Times from a cache of files that appears to have come from a laptop abandoned by Mr. Biden in a Delaware repair shop. The email and others in the cache were authenticated by people familiar with them and with the investigation [Emphasis added].

Superstar New York Times reporter Maggie Haberman, who received a Pulitzer Prize for her reporting on the Russia Collusion hoax, by the way, dared to post on Twitter, “Via @nytimes colleagues, a deep dive into the Hunter Biden investigation, including that the emails released in late 2020, and characterized as possible Russian disinformation by some, were authentic.”

But no one at that paper has ever recalled their previous reporting to correct the record now, after they just abruptly decided the laptop is authentic, despite exactly zero new reporting.

The Times bills itself as the bastion of professional journalism and a beacon of truth — but no one in that newsroom, no one on the paper’s flashy board of directors raised a word of objection at the time, or this week.

To be fair, the Times is the paper of interest today, but it is not the first or only outlet that has been humiliated in this saga.

Following the Post’s censorship by Big Tech at the time the laptop series was published, Politico published a report by Natasha Bertrand (who has since left for a promotion at CNN), claiming the “Hunter Biden story is Russian disinfo, dozens of former intel officials say” — buttressing the justification the tech overlords used to ban access to the story.

Buried in paragraph ten of the story was a quote saying, “We want to emphasize that we do not know if the emails, provided to the New York Post … are genuine or not and that we do not have evidence of Russian involvement.”

Michael Hayden, it is worth noting in case this tale needs an extra shot of cynicism, serves on the board of NewsGuard — the supposedly “neutral” project that claims to fight untrustworthy and “fake news” but employs strictly establishment mainstays such as Hayden, Condoleezza Rice, and fellow Bush alum Tom Ridge.

Like the rest of the establishment media, NewsGuard misled the American public about the authenticity of the laptop. Its cofounder, Steve Brill, took to cable news to claim, apparently based on a hunch, that the laptop was “a hoax, maybe even a hoax perpetrated by the Russians again.”

Fast forward to September 2021, Politico’s national correspondent, Ben Schreckinger, comes out with a book called The Bidens: Inside the First Family’s Fifty-Year Rise to Power, which confirms via a third party that, shocker, the Laptop from Hell is legit.

But did Bertrand or Politico attach an addendum to any of their stories, or release a statement apologizing to their readers for pushing security state, Democrat Party propaganda at the moment it mattered most? Of course not.

These are the most notable examples among many of legacy outlets quietly walking back totally unsubstantiated and false claims they made in their roles as “reporters” during a time when true and clear information was so critical — when the American people were weighing who they wanted to vote for to be their next president.

These so-called journalism outfits lied to and deceived the American people in a scramble to protect their preferred presidential candidate, and they continue to do so as they now insist on gaslighting about their past behavior — which is exactly why the American people, in turn, find them so loathsome.

But fortunately, ink stains. And as much as the legacy media try to pretend otherwise, their work during the most pivotal moment in the 2020 election, and in the months and years of follow-ups, will live on forever.