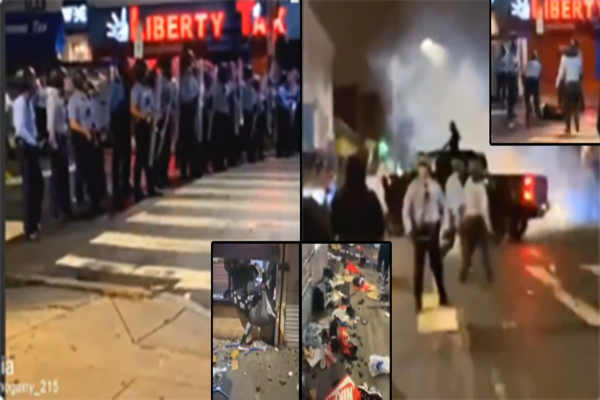 (informationliberation) – Black Lives Matter riots broke out in the Democratic stronghold of Philadelphia late Monday night after a Black man was shot and killed for charging police with a knife in an apparent “suicide by cop.”

Democrat voters responded by rioting, looting and running down police officers in the streets.

Rioters were filmed looting bread shops to feed their families:

Rioters seized control of the streets and threw objects at first responders.

A local reporter shared the story of one BLM supporter who brought his 3-year-old son to the danger zone, had him look a White police officer in the eye and told his child, “This is what racism looks like.”

This is what entitlement and decades of critical race theory brainwashing looks like!

Here’s video of the shooting:

You can see the suspect was ordered repeatedly to drop the knife before charging the officers and getting shot.

The bystanders then proceeded to attack police (who did nothing in response because they know they’ll be pilloried if they dared to respond) and the officers were forced to retreat until backup arrived.

Pennsylvania may be the most important swing state in the 2020 election. Trump held three rallies in Pennsylvania on Monday while Joe Biden was shamed into leaving his basement and visiting with a handful of supporters in the state.

Biden and Democrats have been fanning the flames of these riots since the death of George Floyd (from what was likely a fentanyl overdose) and Kamala Harris urged her supporters to give money to a bailout fund to aid rioters arrested by police.

It will be interesting to see if they side with the BLM mob or denounce their own voters for taking part in tonight’s riots.