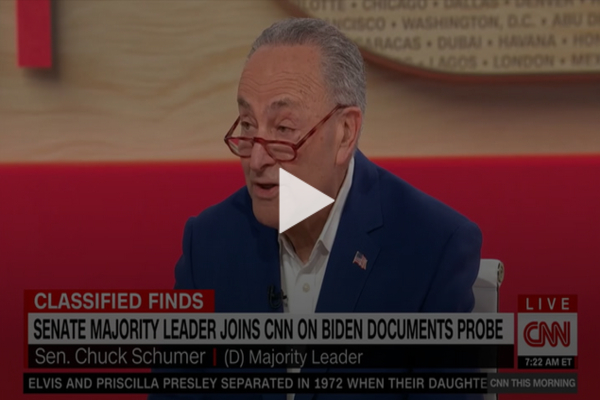 (breitbart) – On Friday’s broadcast of “CNN This Morning,” Senate Majority Leader Sen. Chuck Schumer (D-NY) said that “None” of the things House Republicans have done with their House majority — which include forming committees on law enforcement abuses and a bipartisan one on the Chinese Communist Party — “helped the American people.” And Americans “don’t want just Congress to investigate, investigate.”

Schumer said, “Well, look, always try to work with the Republicans in a bipartisan way. … So, I would hope that House Republicans, under Speaker McCarthy, would reach out to us, we’ll reach out to them. I intend to sit down with Republican leaders in the Senate and the House and try and get things done that can help the American people. But this past week has been very discouraging. What did they do? Let’s look at each of the things they did. None of them helped the American people. The first thing they did is protect multimillionaires and billionaires from being audited. … Then they put in a budget that would require us to cut so many things. Their ten-year budget would cut Medicare and Social Security. Wow. Then they put in some things on abortion that would allow doctors to be prosecuted, criminalization in certain instances. And the final thing they did is launch a whole lot of committees to investigate. You know what the American people want us to do? They want us to do things to make their lives better. They don’t want just Congress to investigate, investigate.”