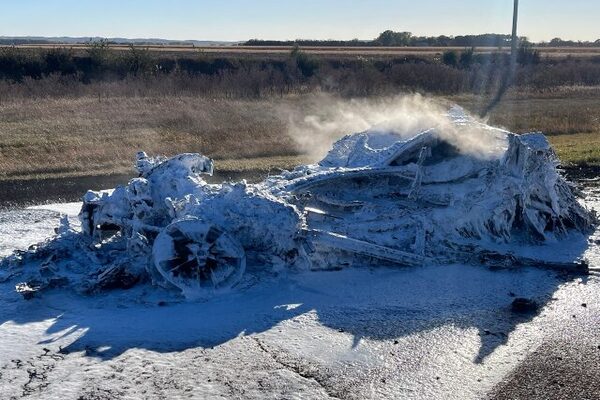 (breitbart) – An electric vehicle fire led to a temporary closure of a highway west of Vermillion, South Dakota, last week. The EV’s battery burst into fire, turning the car into an unrecognizable mess after the blaze was eventually put out.

The Vermillion Fire EMS Department says it happened on Highway 50 near the Business Route exit just after 4 o’clock Tuesday afternoon. Crews arriving on scene found a small car on fire with flames spreading into the ditch.

Because flames had reached the cars high-voltage battery, firefighters secured the area to wait for the battery to cool. Highway 50 eastbound to the Business route was closed for around an hour and a half. The cause is under investigation.

In September, Breitbart News reported that another Tesla caused major issues after catching fire with firefighters in Stamford, Connecticut, struggling to put out the blaze. Breitbart News previously reported that fire departments have begun recognizing that electric vehicle fires pose a significant danger and need further training to handle them appropriately.

A report from the Washington Post identified the lithium-ion technology of Tesla car batteries as particularly flammable given their use of specific “volatile” and “combustible” ingredients.

Patronis explained how firefighters need “special training” to understand the mechanism of electric vehicle fires related to their lithium-ion batteries.