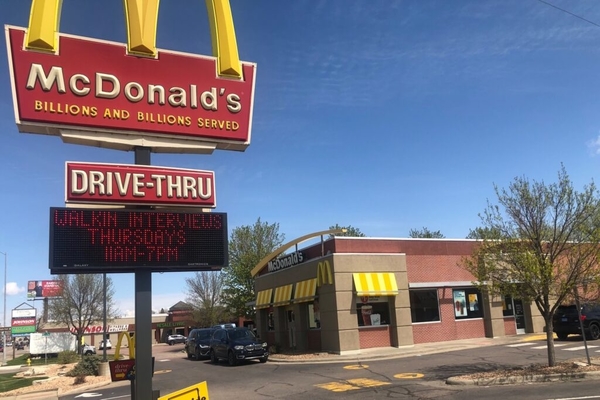 (breitbart) – McDonald’s says they are forced to raise menu prices as worker wages climb, as well as close down some restaurants due to labor shortages and slower service in some locations, according to reports.

The burger giant is raising menu prices in order to sustain the rapidly growing costs of supplies and wages, according to the Wall Street Journal. The report indicated that the company had increased salaries by at least ten percent this year alone.

The report added that the company also has to pay more for paper, food, and other supplies and expected the commodity costs to go up anywhere between 3.5 percent to four percent. Unfortunately, executives said the prices in the U.S. are up roughly six percent from last year, which will trickle down to the consumer.

The WSJ reported:
McDonald’s said that bigger order sizes and higher prices increased its revenue in the U.S., as did its new crispy chicken sandwich and celebrity-endorsed meals. Diners are placing more to-go orders and buying for larger groups than before the pandemic, contributing to higher sales per customer, executives said.

McDonald’s, the world’s biggest burger chain, said that it had fewer Covid-19-related restaurant closures over the past quarter in major markets such as Canada, France and Germany, helping McDonald’s sales in those countries. Still, vaccine health pass requirements in France and quarantine orders in Australia, for example, made operations more challenging, the company said.

In the U.S., roughly 3,000 McDonald’s dining rooms remain closed in areas with high Covid-19 infection rates, or roughly 20% of locations. U.S. sales remain elevated at drive-throughs, online and through delivery, even after reopening a location’s dining room, executives said.

“Certainly I was hoping and expecting that we were going to see the situation improve maybe a little bit more quickly than what’s materialized,” said Chief Executive Chris Kempczinski, according to the WSJ.

In addition, McDonald’s claimed that it has struggled in finding workers that will be able to “serve customers as quickly as possible and keep its stores open at full hours” even with high wages, which has increased by around five percent since the second quarter and averaging 15 percent on the year.

Business Insider reported that due to the inability to find workers, “Restaurants have been cutting their hours” and are “expected to remain short-staffed well into 2022.”

The labor shortage is “also putting some pressure around speed of service,” Kempczinski said, according to Business Insider, adding that the restaurants were “down a little bit on speed of service over the last year-to-date.”

“Some McDonald’s restaurants have been shutting their dining rooms, too, like one in North Carolina that said it couldn’t find enough staff to operate as usual,” Business Insider added.

“That’s also a function of not being able to have the restaurants fully staffed,” Kempczinski said.