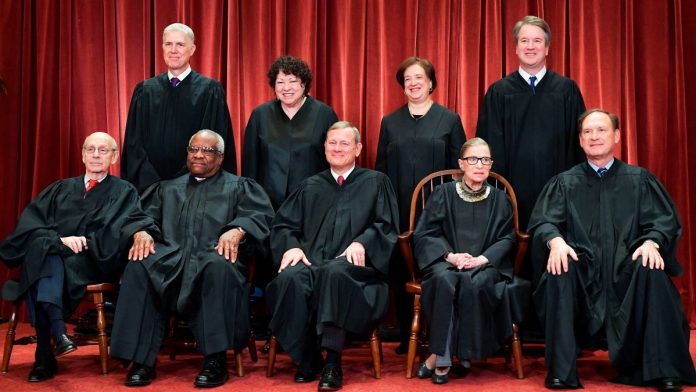 (Gateway Pundit) – Ruth Bader Ginsburg spoke with the BBC this week about the upcoming impeachment trial in the US Senate.

During her questioning, Justice Ginsburg suggested that US Senators could be disqualified from the proceedings if they are not impartial.

Justice Ginsburg: “The House indicts, and the Senate tries. Should a trier be impartial? Of course, that’s the job of an impartial judge.”

If Schumer or Pelosi (or whoever might have standing) sues McConnell and Graham, arguing that they’ve disqualified themselves from the trial, presumably SCOTUS could choose to hear that appeal. Could Ginsburg take part in that case now, having already stated her opinion that senators have a duty to be impartial as the triers of fact in impeachment? “I would not be surprised if some members of the Senate quoted RBG’s remarks to criticize their colleagues neutrality,” Blackman noted at one point in today’s post. Indeed. Ginsburg is now a player in this dispute, inadvertently or not, not just a potential adjudicator. Way to go.

Flashback: Ruth Bader Ginsburg Jabs Trump On Impeachment: ‘The President Is Not A Lawyer’

Supreme Court Justice Ruth Bader Ginsburg on Monday spoke out in response to President Donald Trump’s repeated calls for House Democrats to end their ongoing impeachment effort, reportedly stating: “the president is not a lawyer.”

Ginsburg made the comment while appearing at an event in New York City, where she received the Berggruen Institute Prize for her contribution to philosophy and culture, according to CNN. The 86-year-old reportedly plans to donate the $1 million prize to non-profits focused on promoting economic opportunities for women.

Speaking to BBC at the event, Ginsburg expressed hope for “good people on both sides of the aisle to say let’s stop this dysfunction” and “work together for the good of the country.” She did not say whether her comments were related to the impeachment proceedings.

On Tuesday, the House Rules Committee met to debate the parameters of the impeachment voting process, the final step before the full lower chamber votes on whether to impeach President Trump over his contacts with Ukraine.

The House Judiciary Committee presented two articles of impeachment against the president last week — abuse of power and obstruction of Congress — both of which are expected to be approved in the full House but expected to fail in the Senate.

“The House chose this road. It is their duty to investigate,” McConnell said in a floor speech. “It’s their duty to meet the very high bar for undoing a national election. As Speaker Pelosi herself once said, it is the House’s obligation to, quote, ‘build an ironclad case to act.’”

“If they fail, they fail. It is not the Senate’s job to leap into the breach and search desperately for ways to get to guilty. That would hardly be impartial justice,” he added.

President Trump has called the impeachment inquiry a “hoax” designed to harm his re-election prospects in 2020.