(dailyconservative) – President Trump has been accused of “second-degree murder” by MSNBC legal analyst Glenn Kirschner for his actions in the initial outbreak of the coronavirus in the U.S.

Kirschner said during a segment on the “The Dean Obeidallah Show” that, “What Donald Trump has just done, by virtue of the tapes that Bob Woodward released, is he has upped his own criminal ante to second-degree murder. He was lying to the American people about the danger this virus posed.”

While Democrats encouraged Americans to go out to Chinese New Year celebrations, President Trump was shutting down travel from China.

Kirschner appears to be suffering from Trump Derangement Syndrome and it will likely only worsen as the election draws closer.

The truth is that leftists and Democrats level outrageous accusations at the President nearly every day. Americans need to ensure these people are never given any real power in government.

Kirschner, who argued in April that Trump was guilty of second-degree murder for floating hydroxychloroquine as a potential treatment for the coronavirus, expressed the same sentiment for Trump for “lying to the American people about the danger this virus posed.”

“What Donald Trump has just done, by virtue of the tapes that Bob Woodward released, is he has upped his own criminal ante to second-degree murder,” Kirschner declared. “And here’s why: He was lying to the American people about the danger this virus posed. Think about this, Dean. He was saying to Bob Woodward in very dramatic tones, ‘You know, this thing is airborne only you need to do is breathe near somebody who is infected and, you know, you are going to get it.’”

Kirschner argued his case, explaining Trump knew but refused to order PPE production for the United States while also arranging the State Department to deliver PPE to China.

“This man has upped the criminal ante to second-degree murder, and there are only two elements for second-degree murder,” he stated. “The first is that you caused the death of another. The second element is the intent element. And here’s where it would otherwise get tricky if we didn’t have Trump’s incriminating admissions. … We are not going to say Donald Trump intended to kill people. Or if he didn’t intend to kill, he intended to inflict serious bodily injury. Let’s give him that one.”

“The third is what’s called ‘conscious disregard,’” Kirschner added. “That’s defined as your conduct was in conscious disregard of the extreme risk you were creating to other human beings that they would suffer death or serious bodily injury. Trump has admitted, in my opinion as a career prosecutor, and frankly, I was the most experienced homicide prosecutor in the Department of Justice because of our unique jurisdictional mandate in D.C., that is second-degree murder, and Donald Trump must be held accountable.” 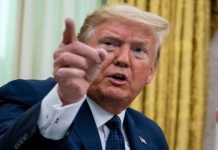 BREAKING: Mark Zuckerberg Gets Bad News From Senate – It’s About...