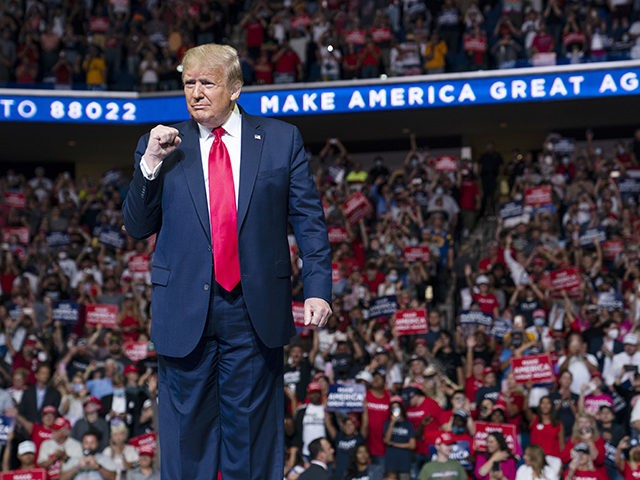 The Trump campaign bested Joe Biden’s (D) campaign in July, outraising him by $25 million, according to final numbers released this week.

The Trump campaign also announced that it officially surpassed the billion-dollar threshold “with a cycle to date haul of $1.1 billion” and touted its cash on hand advantage of over $300 million. Biden and Democrats reportedly have $294 million cash on hand.

“With 90 days until victory, our teams and supporters are in overdrive working to re-elect President Trump and Republicans up and down the ballot,” RNC Chairwoman Ronna McDaniel said in a statement, stressing the growth of enthusiasm across the country.

“From Maine to Nevada, the enthusiasm we are seeing from voters only continues to grow as Americans know the critical choice they face in November – a lawless cancel culture under Joe Biden, or a Great American Comeback under President Trump”:

The Trump campaign said it is continuing in its efforts of “powering the largest field program and data operation in Party history,” with the RNC hiring 300 field staffers, “bringing the total Trump Victory operation to over 1,500 – double that of Biden’s field operation,” according to the campaign’s release.

“With a grassroots army of 1.8 million Americans, the Trump Victory field effort is on pace to surpass the 2.2 million volunteers that helped re-elect President Obama in 2012,” the release added.

Trump Victory data obtained by Axios this week indicated that the campaign’s ground game is continuing to reap positive results. The GOP is reportedly closing the voter registration gap in key swing states such as Pennsylvania, Florida, and North Carolina:

According to the data obtained by Axios, the GOP has “lessened the margin by 133,000 registered voters in Pennsylvania and 87,000 voters in Florida” while gaining “a net 216,410 voters since Election Day 2016” in North Carolina.

Republicans have also reclaimed a voter registration advantage in Iowa and are outpacing Democrats in Arizona.