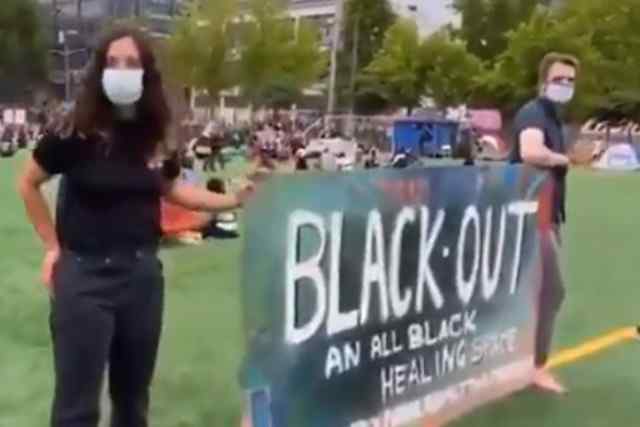 (Infowars) – A video out of the ‘Capitol Hill Organized Protest’ zone in Seattle shows white people enforcing a segregated area of a park reserved for black people only.

Because apparently, segregation is now progressive.

The clip shows a man asking a white woman at what time the “Black Out” ends.

“Thing is, I’m half Italian and half Columbian so do I get a pass to get in there?” he asks.

“Well this space is held right now for just black people,” she responds.

She she tells him, “If you have black ancestry, if you’ve experienced oppression because you are black then you can enter this space.”

“White people enforcing a black only space – lol “anti-racist”. These people are trying to take us back to the 1950s,” commented Tim Pool.

“Segregation is back in vogue. CHAZ/CHOP establishes “black only” spaces. It’s like Jim Crow all over again except it’s woke to be racist and corporations throw billions of dollars at you,” remarked Ian Miles Cheong.

Meanwhile, a second shooting in the space of 48 hours was reported in the CHOP area.

“One person with a gunshot wound arrived at Harborview Medical Center in a private vehicle, according to hospital spokeswoman Susan Gregg. The person was in serious condition,” reports the Seattle Times.

“Seattle police confirmed one person was injured in a shooting. They also said they heard reports of an additional shooting Sunday night, but were receiving conflicting information and could not verify that.”