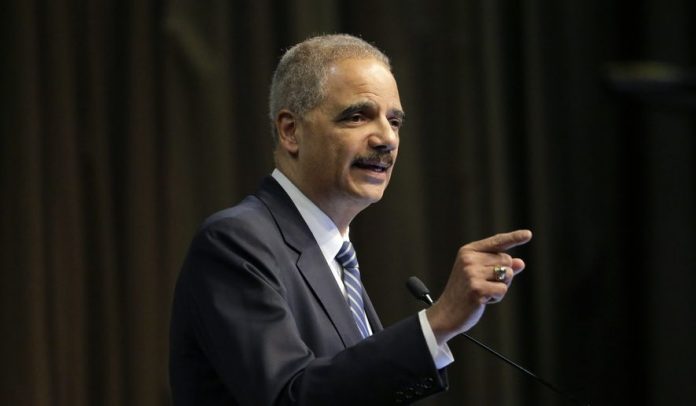 (Gateway Pundit) – Former Obama Attorney General Eric Holder sent a chilling message in a very public way to U.S. Attorney John Durham–the man investigating abuses by the FBI and Justice Department against President Trump and members of his administration and campaign in the Russia-election investigation–warning Durham he is risking his reputation.

Holder wrote an op-ed published Wednesday night by the Washington Post calling current Attorney General William Barr “unfit” to serve as attorney general. The threat to Durham is buried in the op-ed, but jumps out like a dagger thrust from the dark.

…As a former line prosecutor, U.S. attorney and judge, I found it alarming to hear Barr comment on an ongoing investigation, led by John Durham, the U.S. attorney in Connecticut, into the origins of the Russia probe. And as someone who spent six years in the office Barr now occupies, it was infuriating to watch him publicly undermine an independent inspector general report — based on an exhaustive review of the FBI’s conduct — using partisan talking points bearing no resemblance to the facts his own department has uncovered. When appropriate and justified, it is the attorney general’s duty to support Justice Department components, ensure their integrity and insulate them from political pressures. His or her ultimate loyalty is not to the president personally, nor even to the executive branch, but to the people — and the Constitution — of the United States. Career public servants at every level of the Justice Department understand this — as do leaders such as FBI Director Christopher A. Wray and Inspector General Michael Horowitz. Their fidelity to the law and their conduct under pressure are a credit to them and the institutions they serve. Others, like Durham, are being tested by this moment. I’ve been proud to know John for at least a decade, but I was troubled by his unusual statement disputing the inspector general’s findings. Good reputations are hard-won in the legal profession, but they are fragile; anyone in Durham’s shoes would do well to remember that, in dealing with this administration, many reputations have been irrevocably lost. This is certainly true of Barr, who was until recently a widely respected lawyer. I and many other Justice veterans were hopeful that he would serve as a responsible steward of the department and a protector of the rule of law.

Holder closes with his statement that Barr is ‘unfit’. His case is totally based on policy differences and his claimed understanding of the nature of the job, which is odd considering Holder once called himself Obama’s “wingman” when he served as his attorney general and called Obama “my boy”: “I’m still the President’s wing-man, so I’m there with my boy.”

Virtually since the moment he took office, though, Barr’s words and actions have been fundamentally inconsistent with his duty to the Constitution. Which is why I now fear that his conduct — running political interference for an increasingly lawless president — will wreak lasting damage. The American people deserve an attorney general who serves their interests, leads the Justice Department with integrity and can be entrusted to pursue the facts and the law, even — and especially — when they are politically inconvenient and inconsistent with the personal interests of the president who appointed him. William Barr has proved he is incapable of serving as such an attorney general. He is unfit to lead the Justice Department.

Barr, 69, is serving as attorney general a second time–the first during the presidency of George H.W. Bush. Barr is at the peak of his profession and is immune to Holder’s criticism.

Durham, on the other hand, while also Barr’s age, has been a career assistant U.S. attorney who was promoted by President Trump to U.S. Attorney for the District of Connecticut in 2017 after 35 years of service there. Holder’s message to Durham is clear, play ball or face ruin.

Durham’s statement that so “troubled” Holder:

“I have the utmost respect for the mission of the Office of Inspector General and the comprehensive work that went into the report prepared by Mr. Horowitz and his staff. However, our investigation is not limited to developing information from within component parts of the Justice Department. Our investigation has included developing information from other persons and entities, both in the U.S. and outside of the U.S. Based on the evidence collected to date, and while our investigation is ongoing, last month we advised the Inspector General that we do not agree with some of the report’s conclusions as to predication and how the FBI case was opened.”

Why would Holder find that statement so troubling that he would send a warning to Durham via the Washington Post? Holder knows very well what he is doing with his carefully worded threat and should know better than to warn or threaten a prosecutor–but the Deep State and its corrupt actors must be protected and “wingman” Holder has a job to do.

“Good reputations are hard-won in the legal profession, but they are fragile; anyone in Durham’s shoes would do well to remember …”