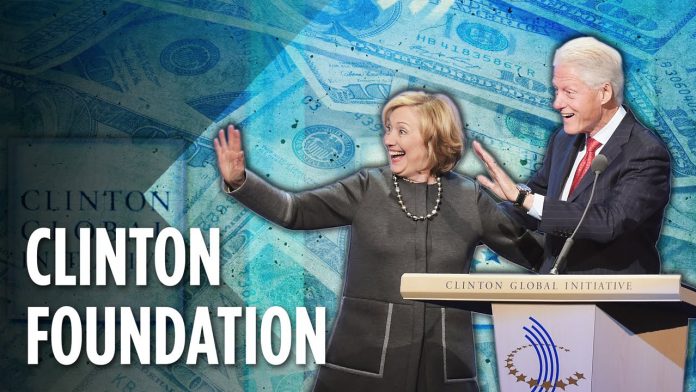 (Gateway Pundit) – An investigation launched into Hillary Clinton in November of 2017 by the DOJ and US Attorney John Huber has ended.

Huber never interviewed any key figures in the two-plus years of his investigation.

And key whistleblowers were never interviewed and their evidence was lost during the sham investigation.

The House Oversight Subcommittee on Government Operations held a hearing on Capitol Hill on the Clinton Foundation in December 2018.

Meadows told the audience at the beginning of the hearing that the Department of Justice was unwilling to make John Huber available for the hearing.

Huber was assigned months ago by then-Attorney General Jeff Sessions to investigate several controversies linked to Hillary Clinton and the Clinton Foundation.

Above: Lawrence Doyle of DM Income Advisors and John Moynihan of JFM Associates testified before the congressional committee in December.

Witness John Moynihan and witness Lawrence Doyle accused the Clinton Foundation of using funding in the Clinton Health Initiative for trips and expenditures for personal use.

The witnesses told the committee they had to send their evidence to the Huber investigation THREE TIMES because they kept losing it.

What the hell is going on with this Huber investigation?

The Huber investigative team suddenly became interested in the evidence when they heard the two men were going before Congress.

Rep. Meadows: Why do you think Mr. Huber waited until November 30th to call you about 4 letters you had sent prior? Mr. Moynihan: I don’t know. Rep. Meadows: Do you think it might have had to do with you coming here to testify?… They were fully aware because we had asked them to come and be a witness at this particular hearing. Then all of the sudden you get a phone call from what, Mr. Huber’s second in command. Is that correct? Mr. Moynihan: He was clearly the assistant US Attorney dealing directly with Mr. Huber. Rep. Meadows: Well I find it just very coincidental that on November 30th, a few days before the hearing, after we notified them that we wanted them to come testify that all of the sudden they would start following up. So Mr. Doyle what did they say about the documents that you had provided them?

They lost the first two set of documents that were sent to them.

In May 2019 Attorney General Bill Barr, who replaced Jeff Sessions, told CBS News that John Huber had NEVER EVEN STARTED his investigation.

They never looked at anything.

It was all a dog-and-pony show by Jeff Sessions.