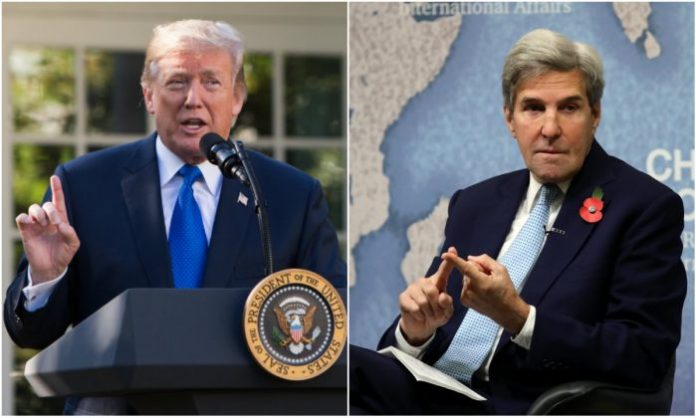 Trump said the Obama administration’s “foolish Iran nuclear deal was signed in 2013, and they were given $150 billion, not to mention $1.8 billion in cash.”

Kerry said, “It is an outright lie, an outright lie by the president of the United States that they were given $150 billion. They were not. And the money that they did receive was their money because they sued the United States of America and won in court and were being paid interest. So American citizens were paying interest every single day that was accruing. More and more billions of dollars that were going to go to Iran. We cut that short. We negotiated a deal that greatly reduced the amount of money they were, in fact, supposed to receive under court order, and they would have received it eventually. And we transferred that to them, most of which they owed to other countries and other people in a massive debt that Iran had accrued. So the fact is that he has lied about that.”

He continued, “We are not safer because this president has been willing to personally invoke his anti-Obamaism to such a degree that he’s run the risk of war. That response by Iran could have been significantly different. and it is not right for the president of the united states to put the united states in a position where we are dependent on a regime that we don’t like to somehow behave in a way that saves this president from himself.”

He added, “I will be amazed if this Iranian regime will negotiate with Donald Trump. They found out he’s not trustworthy. They’ve seen his lies as we have seen his lies, and that is not the basis on which to invite people to a table. Nor is it possible to squeeze and force them to that table. If we learned anything in our negotiation with Iran, it’s they pride themselves in a more than 5,000-year history as a nation-state, as a culture, as a presence. And I think this president just doesn’t stop to understand those kinds of things, let alone an awful lot of other things that are important to the presidency of the United States.”