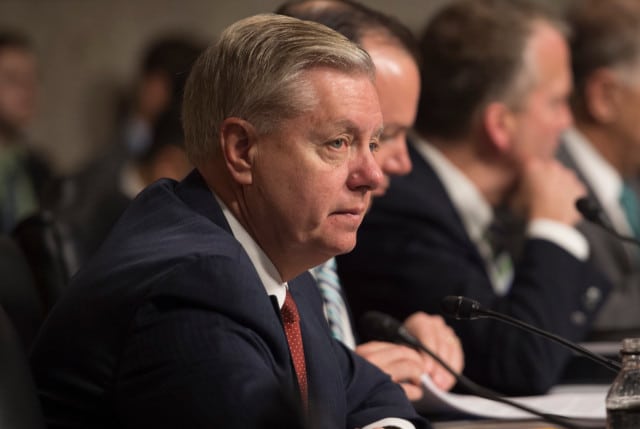 (Gateway Pundit) – On May 1, 2019 Lindsey Graham, the Chairman of the Senate Judiciary Committee, promised investigations on how the Mueller probe started.

He made the comments during testimony by US Attorney General Bill Barr in front of the US Senate.

Lindsey Graham is a fraud.

Lindsey NOW SAYS he will wait to call witnesses until the General Flynn case is over.

Lindsey has been chairman of the Senate Judiciary Committee and has yet to hold a hearing with any deep state actors.

Lindsey Graham is trying to run the clock out.

Lindsey is a liar.

On Tuesday Lindsey Graham already ruled out calling in Barack Obama or Joe Biden to testify on Obamagate.

Obama was likely running the criminal scandal from the Oval Office.

Lindsey has no interest in getting to the truth in the nation’s greatest political scandal.

President Donald Trump’s aggressive campaign to encourage sweeping investigations of his predecessor Barack Obama met a unanimous response from Senate Republicans: No thanks. Trump’s Senate allies on Monday stopped short of echoing Trump’s claim that Obama acted illegally when the Justice Department began probing incoming national security adviser Michael Flynn in late 2016. And they indicated that the Senate would pass on investigating the former president as they conduct their own investigations that could soon ensnare other senior Obama administration officials. “I’m not anticipating calling President Obama,” said Senate Judiciary Chairman Lindsey Graham (R-S.C.), whose panel is investigating the origins of the 2016 Russia investigation, even as he vowed to bring in former senior Obama administration officials as witnesses. Those ex-officials include former FBI Director James Comey and former acting Attorney General Sally Yates. “I think the president’s got a real good reason to be upset with the Obama people,” Graham said.