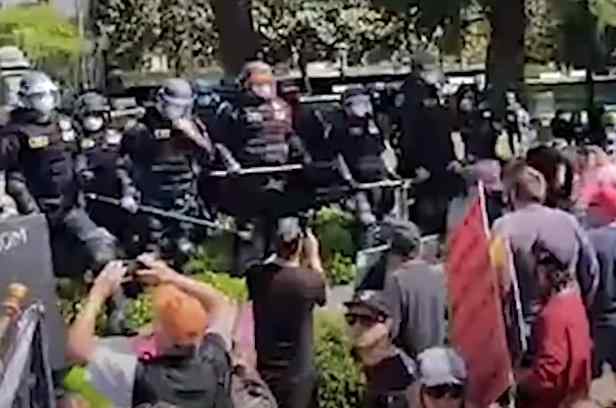 In Sacramento, the state’s capital, a packed crowd of thousands of protesters faced off with lines of police officers in full riot gear.

According to The Guardian, “The California Highway Patrol (CHP) had announced that it would be barring protests at the Sacramento state capitol because of a lack of social distancing by participants at a previous rally, but protesters gathered on the steps of the building regardless, chanting ‘Whose house? Our house!’”

In Coleman’s video, a Marine veteran named Cordie Lee Williams can be seen speaking into a megaphone, challenging California police officers to “stand down.”

“In the face of tyranny, in the face of freedom, are you going to sit there in your riot gear against peaceful protesters?” asked Williams. “Or are you going to say, ‘you know what, it’s time to stand up for my country. Because I took an oath of office and it said, ‘I will defend all enemies, foreign and domestic.”

Williams continued, “You might lose your job, but I’d rather lose my job than lose my soul.

“What are you going to tell your little boy or your little girl tonight? That you took your baton and you crushed somebody’s skull, who was a mom? Is that what a tough guy does? That’s not what honor, courage, and commitment means in the Marine Corps.”

Shortly after Williams challenged the officers to ‘stand down,’ the officers appeared to retreat and leave the location.