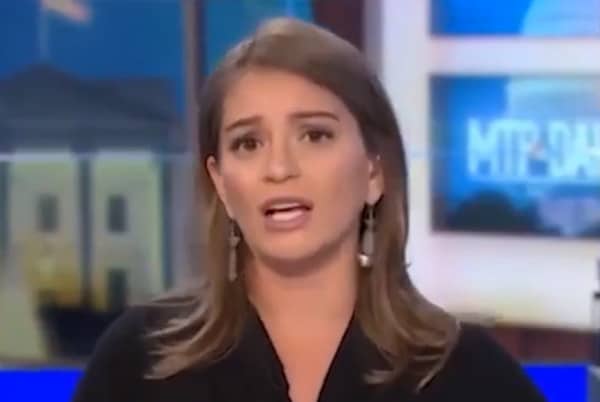 (Gateway Pundit) – In a shocking segment, MSNBC’s Katy Tur suggested that the FBI should be tracking young white men online to radicalize them, provide resources for creating explosives, and then arrest them.

Tur was comparing young white men to ISIS terrorists in an interview with Frank Figliuzzi, the former Assistant Director for Counterintelligence at the FBI.

“When you’re looking at ISIS or you’re looking at radical Islamic terrorism, I covered a number of stories where the FBI would track young kids or young men and they would talk to them online and say ‘you know, here’s how you build a bomb,’ or ‘here’s where you get your bomb making materials,’ and they track that person as that person radicalized and then arrested them before they could do anything bad,” Tur said. “Why is the same not being done for white extremists or is the same being done and we just don’t know about it?”

Figliuzzi responded that it is “time to ask that question” and to “wrestle with it” because politics “does enter in.” He then mocked people who would defend the First Amendment and claim that this is the act of “thought police.”

The network seems to believe that everyone who does not support Democrat establishment candidates is a dangerous racist — not only if you are right-wing, but even if they are leftists.

“I do find it fascinating that racist, liberal whites seem to love them some Bernie Sanders. [They] consistently and always have a problem with any person of color who doesn’t want to follow the orthodoxy of their lord and savior, Bernie Sanders. The man cares nothing for intersectionality. I don’t care how many people from the island of misfit black girls you throw out there to defend you on a regular basis, it doesn’t mean your campaign is serious,” Johnson said.