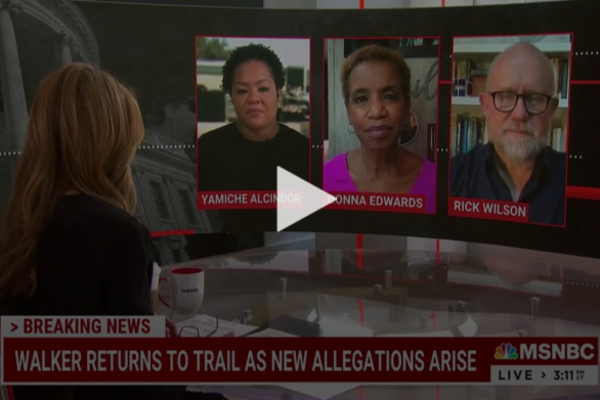 (breitbart) – MSNBC anchor Nicolle Wallace said Thursday on her show “Deadline” that there was “rot” in white women who voted for Donald Trump.

Wallace said, “The sign of rot in white Independent women voters voting for Donald Trump and the numbers they did after he committed on tape to being enthusiastic about grabbing women in the — because he is famous and they let you, he is describing enthusiasm for sexual assault, and they voted for him anyway.”

She continued, “J.D. Vance, who did an interview, not with me, not a mainstream journalist, where he articulates support for women staying in violent relationships and marriages, says that is better for the kids. The tragedy is that women will vote for him. Women saw to it to vote for Trump. What is the thing to wake people up from some sort of sleepwalking trance that says, ‘Well, he gets me where I want to go on life, or he gets me where I want to go on tax policy,’ and understand that the norms are held up by having people with some modicum of decency and morality.”

Wallace asked, “How do you make women voters understand that to be the case?”

Former Rep. Donna Edwards (D- MD) said, “I think this is been the great struggle, especially in this environment. Once Donald Trump got that nomination in 2016 and then went on to win the presidency, even in the face of the allegations that were coming from multiple sources over multiple kinds of behaviors regarding women, not the least of which was the “Access Hollywood” videotape. But I think there is no longer a moral bar in the Republican party, that Donald Trump essentially opened the door to candidates like Herschel Walker.”