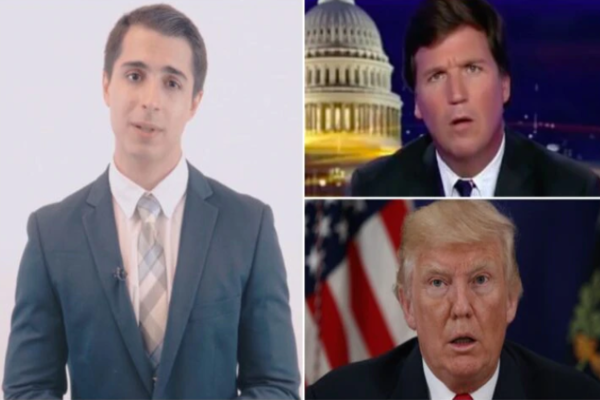 Many Trump supporters, who have had their hopes dashed so many times over the past year, are sending more of their money to the America First Policy Institute (AFPI), an organization set up to ostensibly help further Trump’s policy agenda now that he is out of the White House.

Unfortunately, it appears that the AFPI is another grift that has been set up by Never Trumpers and other lowlifes to wring money out of desperate conservatives.

Columnist Pedro Gonzalez analyzed the staff of the AFPI and found a whole host of anti-Trump voices who are siphoning money from unsuspecting Trump supporters while exploiting the former president’s name.

Gonzalez drew special attention to Daniel Di Martino, who was recently brought onto the AFPI as an “ambassador.” He is a Venezuelan immigrant in America on a student visa who has argued frequently in favor of mass immigration.

“I’m afraid that Mr Trump’s immigration restrictions are transforming America from the welcoming, shining city on a hill I want to fight for into a dark, closed-off nation,” Di Martino wrote in a Washington Times op/ed last year, arguing for more immigration in the midst of the COVID-19 pandemic.

Worse yet, Di Martino is openly hostile to the American working class and believes that better, more talented foreigners should be imported to displace them from the workforce in their own country.

“If you support blue-collared jobs, if you support construction, if you support manufacturing, you need companies like Google, like Amazon to bring more engineers so that they can demand more services from them,” Di Martino said in a debate with nationalist Ryan Girdusky last year.

Additionally, Di Martino rejects the America First foreign policy of non-intervention. He wants the U.S. to facilitate the overthrow of Venezuelan President Nicolas Maduro and perhaps get bogged down in another forever war in the process.

“While calls for the use of military force were dismissed among diplomats, American intervention could have economic benefits for both Venezuela and the United States,” Di Martino said in 2018.

Di Martino is also an adamant denier of election fraud:

He also has a habit of playing the race card on critics of his neoconservative globalist ideology:

Gonzalez also points to former acting United States Domestic Policy Council Brooke Rollins, a Jared Kushner ally who leads the AFPI, as a problematic individual who has been working to undermine Trump’s agenda for years. There are a host of others who have similarly awful records, including AFPI board vice chair Larry Ludlow, AFPI policy analyst Javon Price, and AFPI election integrity expert Hogan Gidley.

“It is a curious thing that the greatest obstacle to an authentic populist and nationalist agenda is Trump himself and his coterie of hangers-on. There is still a thriving grassroots movement that hopes Trump will course-correct after all this time and shed himself of Rollins, Kudlow and Kushner. But that hope is a distant dream, especially when you consider who has Trump’s ear,” Gonzalez wrote.

Trump’s inability to rid his sphere of charlatans may ultimately doom the America First movement. The AFPI is disgraceful, and the former president ought to be ashamed to attach his name to such a disreputable project.