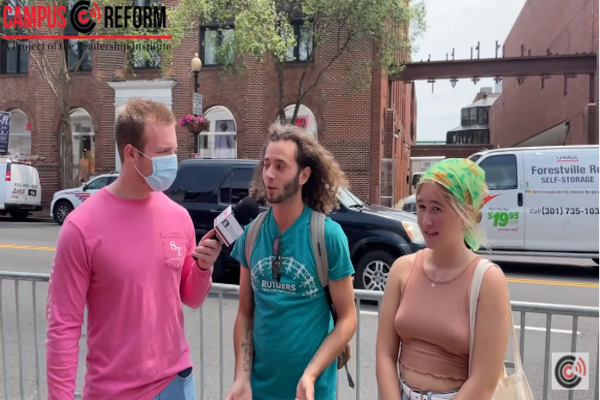 (breitbart) – Georgetown University students recently signed a fake petition to cancel Memorial Day due to its celebration of “American imperialism.” One student said he “didn’t really think of it in this way” until he got to college and took “Women’s and Gender Studies classes,” which put him on a “fuck the U.S.” path in life.

Campus Reform’s Addison Smith went to Georgetown University to conduct a social experiment to see if students would be willing to sign a fake petition seeking to abolish Memorial Day over alleged “American imperialism.” Many students signed the petition.

“Is this a holiday you support? Is this something you’re going to be celebrating?” asked Smith after telling the students about his petition.

“I’m not celebrating,” one student affirmed. “I don’t think Memorial Day should be a thing that we celebrate, personally. I feel like it’s a celebration of U.S. imperialism and colonialism.”

“I think it represents a lot of negative aspects of America, and highlights something that, you know, people shouldn’t necessarily be proud of,” another student said. “If we’re going to honor and celebrate the dead, I think it should be those who lost their lives to genocide in America.”

After being asked if they knew why Americans celebrate Memorial Day in the first place, several students admitted they didn’t know.

“I mean, it says, like, imperialism,” answered one student, referring to the fake petition.

Another student, who agreed that Memorial Day memorializes and glorifies so-called “American imperialism,” said she wouldn’t sign the petition, “because it’s one of my bank holidays, and I work at a bank.”

“But I do think we should probably rebrand Memorial Day as something else, like, let’s celebrate something worthwhile, instead of imperialism,” the student clarified.

A third student explained that he thinks differently after Women’s and Gender Studies courses in college, which have put him “on this path” where “I’m, like, yeah, like, fuck the U.S.”

“I mean, like, I didn’t really think of it in this way until I got to college, and, like, I took women’s and gender studies classes, and that put me on this path, where I’m, like, yeah, like, fuck the U.S., like,” the student said.