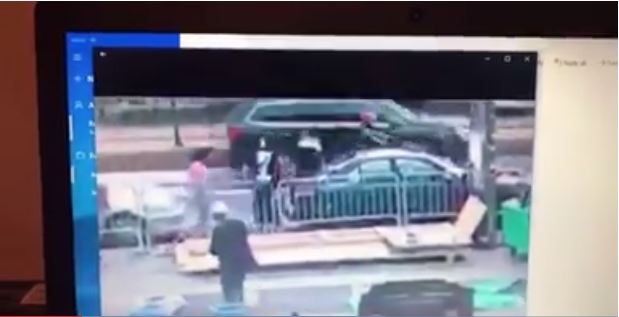 Surveillance video from outside City Hall appears to show protesters receiving a small shipment of bats before anti-cops activists clashed with officers on the Brooklyn Bridge Wednesday morning.

The delivery was made by a car parked on the street near City Hall, with one man seen retrieving six bats from the trunk, according to the footage provided by sources.

Police sources said the bats were delivered so the anti-cop activists could confront a “unity” rally proceeding over the Brooklyn Bridge into Manhattan.

It’s unclear if the City Hall protesters used the bats in the wild Brooklyn Bridge brawl between opposing protesters. But at least one was recovered after the dust settled, police sources said.

A cane was also used in the melee, with one counter-demonstrator seen on video using the object to whack cops over the head during the melee on the bridge.

In all, four cops, including Chief of Department Terence Monahan — the NYPD’s highest-ranking uniformed officer — and one civilian were injured in the clash, sources said.

The NYPD said 37 people were arrested.