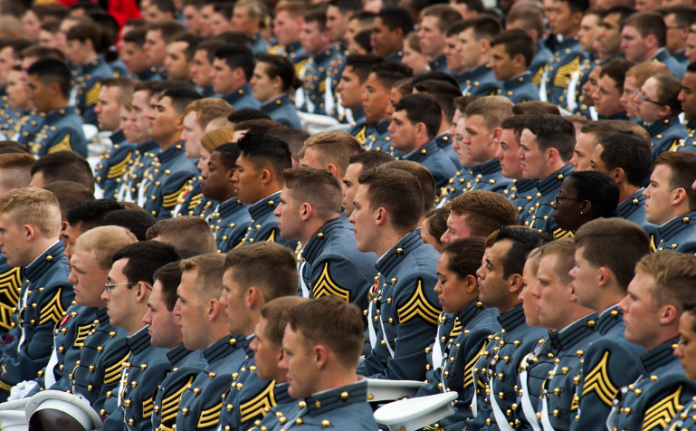 Last month a congressional commission called for the removal of the names of Robert E. Lee and other Confederate officers from landmarks and memorials at West Point and the United States Naval Academy.

On August 29, 2022, the Naming Commission published a set of recommendations for the erasure of tributes to Confederate soldiers, who the cultural Left view as traitors in retrospect.

Retired Admiral Michelle Howard chairs the eight-person panel, where she is accompanied by retired Marine Corps General Robert Neller, that recommends changing the names of halls, housing, and roads dedicated to Confederate officers.

Confederate officers are memorialized at the Reconciliation Plaza monument which was erected in 2001 at West Point. According to Military.com, “Lee’s name is on five West Point landmark including a child development center.”

In addition, the panel discovered a triptych — an art piece consisting of multiple panels — that had the words “Ku Klux Klan” at the entrance of West Point’s Bartlett Hall where a hooded figure with a rifle is shown.

The panel called on Defense Secretary Lloyd Austin to establish rules for removing these references.

“The marker falls outside the remit of the commission,” the panel stated in the report. “However, there are clearly ties in the KKK to the Confederacy.”

The commission recommended that Austin grant secretaries of the Army and Navy the power to start the renaming at the academies. This renaming process could be carried out by the officer schools using the procedures currently at their disposal.

One of the more expensive changes to controversial markers at West Point would be to West Point’s Reconciliation Plaza, which is projected to cost roughly $300,000 in renovations. The West Point class of 1961 donated the markers to commemorate the beginning of the Civil War in 1861 and the reconciliation that took place between the North and South once the smoke settled from the war.

One of the markers features a depiction of Pierre Gustave Toutant Beauregard, a renowned Confederate general, who led “Confederate forces in insurrection against Fort Sumter.”

Following the death of George Floyd in 2020, a heated debate took place across America concerning the status of Confederate monuments. This resulted in the creation of the commission in January 2021, which formed a part of the annual defense authorization bill.

The commission’s first report was finished in May and it featured recommendations to rename military bases such as Fort Bragg and Fort Benning, which are both named after Confederate military leaders.

Additionally, the report recommended that Fort Hood, Texas be changed to General Richard Cavazos, who led a company of Puerto Rican soldiers during the Korean War. He would later lead an infantry battalion in the Vietnam War.

The cultural Left is committed to erasing American history. The first step is to target members of the Confederacy. However, it would be the height of naivete to believe that the renaming and removal of landmarks will stop with Confederate figures. The next targets will be Founding Fathers and other Americans of European extraction who the present ruling class despises.

America First nationalists should not overlook these cultural struggles. They should do everything possible to deny the Left of any cultural victories. At the end of the day, if we lose these battles, American culture will cease to exist within a few decades.