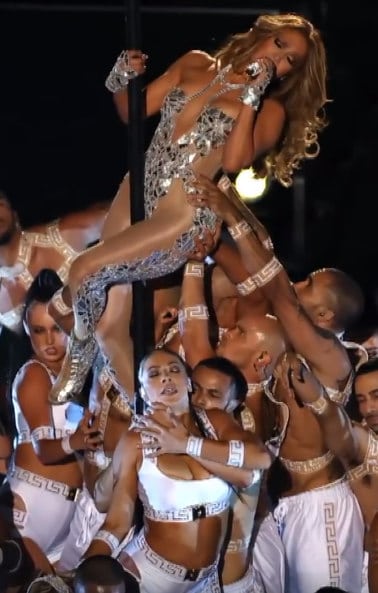 Meanwhile, actual conservatives were enraged by the disgusting scene and the thought that young children were getting exposed to a scantily clad 50-year-old woman doing a pole-dancing routine.

“I don’t expect the world to act like the church, but our country has had a sense of moral decency on prime time television in order to protect children,” preacher Franklin Graham wrote on a Facebook post about the half time show. “We see that disappearing before our eyes.”

“With the exploitation of women on the rise worldwide, instead of lowering the standard, we as a society should be raising it. I’m disappointed in Pepsi and the NFL,” he added.

“We were disgusted with the raunchy show, provocative gestures, pole dancing, lack of modesty,” an angry mother wrote on Twitter.

“Interesting that in the #MeToo era, the @NFL chose this as their halftime show,” another woman wrote.

Another woman quipped: “My aunt just called it ‘The Super Bowl of the Crotch.’”

Bush may have made his comment in another pathetic pandering attempt toward Hispanics. He even criticized Trump for cultural insensitivity after he posted his famous “Taco Bowl” tweet on Cinco de Mayo in 2016.

“What Trump did was so insensitive,” Bush said to Dutch news agency NRC Handelsblad in 2016 after he was defeated by Trump in the primary.

“First, not all Hispanics are Mexican. Secondly, not all Hispanics eat tacos. Thirdly, showing your sensitivity by eating an American dish is the most insensitive thing you can do. Fourthly, to say this, next to all things he already said, is a further insult. It’s like eating a watermelon and saying, ‘I love African-Americans,’” Bush added.

It is no wonder why the conservatism of Jeb Bush and other globalists failed to conservative anything while they were in positions of power.