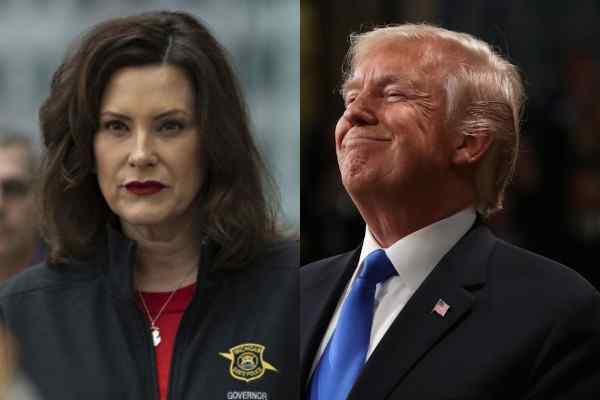 Trump has no respect for the wicked witch of the north.

Trump will be traveling to Ford Motor Co.’s Rawsonville manufacturing plant in Ypsilanti on Thursday despite Whitmer declaring that “non-essential” visits such as his are banned due to her shutdown policies that are crippling the state.

Whitmer’s administration, which has bullied and threatened ordinary citizens throughout Michigan, is effectively bowing to Trump while painting his visit in flagrant violation of her edicts as something the governor is celebrating.

“Ford and the UAW are doing incredible work for the country, and their ingenuity will save lives,” said Zack Pohl, who works as the communications director for Whitmer, in a statement.

“While the president’s visit is contrary to the governor’s order, this is an opportunity to showcase how important Michigan is to the response to COVID-19 and rebuilding our nation’s economy,” he added.

Trump has not officially determined whether or not he will wear a mask while visiting the Ford plant. Reports indicate that Ford is requesting that he wear one while touring the facility.

“Am I standing right next to everybody, or am I spread out? And also you look, is something a hospital? Is it a ward? What is it exactly? I’m going to a plant. So we’ll see. Where it’s appropriate I would do it certainly,” he added.

“In preparation for the visit, we’ve shared with the White House all of Ford’s safety protocols, including our self-assessment, thermal scanning and manufacturing playbook which outlines our policy that everyone wears PPE,” a spokesman from Ford told the Detroit News.

Ford will not threaten Trump with an ultimatum to wear the mask. Trump has avoided wearing a mask during public appearances, showing that he will not succumb to the mass hysteria. The president is setting an example for ordinary Americans to overcome the media-induced panic.

“As we have said previously, we shared our safety policies and recommendations with the White House in advance of this visit. The White House has its own safety and testing policies in place and will make its own determination,” Ford said in a statement.

Trump has refused the advice of the deep state bureaucracy, which wants to scare people into wearing masks. The mask has emerged as a sign of cowardice and obsequiousness throughout the pandemic.

“The CDC is advising the use of non-medical cloth face covering as an additional voluntary public health measure. So it’s voluntary. You don’t have to do it. But they suggest it for a period of time. I don’t think I’m going to be doing it,” Trump said.

Trump’s appearance at the Ford plant on Thursday will be a thumb in the eye of Whitmer, who has kept Michigan in a state of fear throughout the pandemic to buoy her vice presidential ambitions.