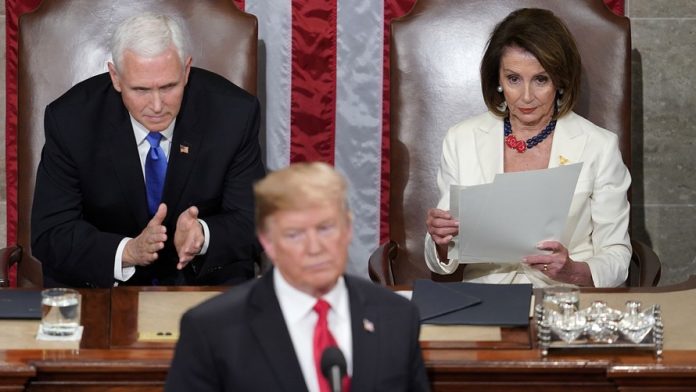 (Gateway Pundit) – Speaker of the House Nancy Pelosi (D-CA) sent a ‘Dear Democratic Colleague” letter Sunday night stating she would be introducing a War Powers resolution this week to “limit” President Trump’s “military actions regarding Iran”. Pelosi said the resolution would set a thirty day deadline for Trump to cease hostilities unless authorized by Congress.

Pelosi said she was acting because Trump authorized the targeted killing of Iran Quds Force leader Major General Qassen Soleimani last Friday without consulting Congress. Pelosi called the killing of the architect of an Iranian proxy war on Americans that killed over 600 U.S. soldiers “provocative and disproportionate”.

Dear Democratic Colleague, Last week, the Trump Administration conducted a provocative and disproportionate military airstrike targeting high-level Iranian military officials. This action endangered our servicemembers, diplomats and others by risking a serious escalation of tensions with Iran. As Members of Congress, our first responsibility is to keep the American people safe. For this reason, we are concerned that the Administration took this action without the consultation of Congress and without respect for Congress’s war powers granted to it by the Constitution. This week, the House will introduce and vote on a War Powers Resolution to limit the President’s military actions regarding Iran. This resolution is similar to the resolution introduced by Senator Tim Kaine in the Senate. It reasserts Congress’s long-established oversight responsibilities by mandating that if no further Congressional action is taken, the Administration’s military hostilities with regard to Iran cease within 30 days. The House Resolution will be led by Congresswoman Elissa Slotkin. Congresswoman Slotkin is a former CIA and Department of Defense analyst specializing in Shia militias. She served multiple tours in the region under both Democratic and Republican Administrations. I greatly appreciate the solemnity with which all of our Members are working to honor our responsibility to protect American lives and values. Thank you for your patriotic leadership during this difficult time.

Pelosi’s resolution is expected to be similar to one filed in the Senate by Sen. Tim Kaine (D-VA) on Friday.