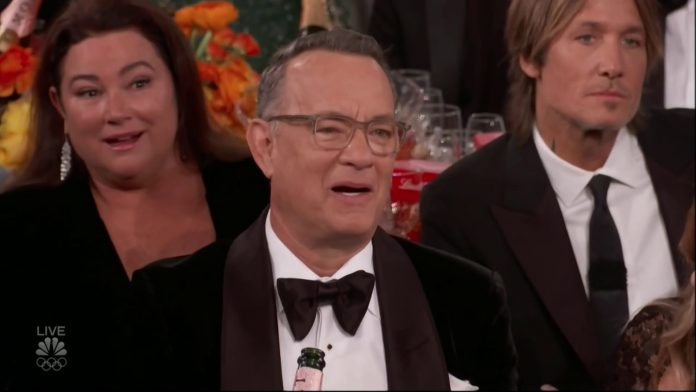 (Gateway Pundit) – Ricky Gervais lives to shred the Hollywood elite. He’s done it for years, and he did it again on Sunday night at the Golden Globes in Beverly Hills.

“Let’s have a laugh — at your expense,” he told the gathered gaggle of celebrities. “Remember, they’re just jokes, we’re all gonna’ die soon, and there’s no sequel.”

At the annual ceremony at the Beverly Hilton Hotel, Gervais ended his monologue by telling the limousine liberals: “If you do win an award tonight, don’t use it as a political platform to make a political speech. You’re in no position to lecture the public about anything, you know nothing about the real world. Most of you spent less time in school than Greta Thunberg. So, if you win, come up, accept your little award, thank your agent and your God and f*ck off. OK?”

Of the plethora of stars who do super hero movies, Gervais said: “They’re job isn’t acting anymore, it’s going to the gym twice a day and taking steroids.” Looking offstage, he asked: “Have we got an award for most ripped junkie?”

Gervais came armed with many barbs. In a reference to the 2019 college admissions scandal, which snared at least two Hollywood elites, Gervais said: “I came here in a limo tonight and the license plate was made by Felicity Huffman,” referring to Huffman’s prison sentence.

And he slapped the tech magnates as well. He said it was ironic that the Apple TV+ Me Too-themed show “The Morning Show” is “made by a company who runs sweatshops in China. You say you’re ‘woke’…”

Gervais mocked the faux racism that Hollywood elites whine about. “Many people of color were snubbed in major categories. Unfortunately, there’s nothing we can do about that. The Hollywood Foreign Press Association are all very, very racist.”

And he said: “We were going to do an ‘in memoriam’ this year, but when I saw the list of people that had died, it wasn’t diverse enough. It was just, no, it was mostly white people. And I thought, nah, not on my watch.”

Then Gervias went further, talking about his Netflix series, “Afterlife,” about a man considering committing suicide after his wife dies of cancer. “Spoiler alert, there’s a season two, so in the end, he didn’t kill himself. Just like Jeffrey Epstein. Shut up, I know he’s your friend, but I don’t care,” Gervais joked.

Epstein came up again when Gervais took aim at Quentin Tarantino’s 2019 film “Once Upon a Time in Hollywood,” which was more than three hours long. “Leonardo DiCaprio attended the premiere and by the end, his date was nearly too old for him. Even Prince Andrew’s like, ‘C’mon, mate…’ ” (Gervais was referring to allegations that longtime Epstein friend Prince Andrew sexually assaulted a girl who was trafficked by Epstein.)

Watch the whole monologue below.