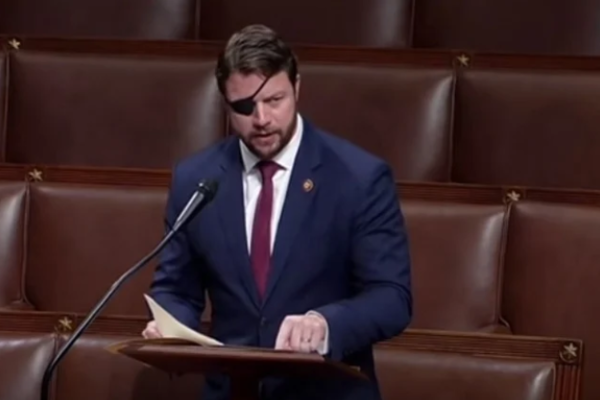 (thegatewaypundit) – The US House voted for Speaker for the 6th time Wednesday afternoon.

Kevin McCarthy has now lost votes since Tuesday and since President Trump’s endorsement.

During the interview, Crenshaw referred to the 20 Republicans challenging the establishment as “terrorists.”

Below is the transcript:

Crenshaw: It’s almost like, they’re being paid by Democrats to force us into a deal with Democrats. Like I don’t know what else to think at this point.

Guy Benson: One name that gets tossed around is Steve Scalise, whose well-liked member of leadership. It’s like, oh, well, you know what? If you gave him a shot instead of McCarthy, first of all, McCarthy would have to step aside for that to happen. Second of all, if it were Scalise, would any of this dynamic change at all? I don’t know.

Crenshaw: No, no, it would change. And we all know it wouldn’t change, which is why we can’t give in. And so those of us who are standing against this, we’re standing for principle. They are standing for notoriety. They’re standing for that extra news that because nobody ever cares about them and they’re frustrated by that, and they want that extra news that we know that we can’t give in to this because then they will always run the conference and they’ll just get another scalp and another scalp, whether it’s whether it’s Boehner or Paul Ryan or them McCarthy. Scalise would just be next and we all know it. We just can’t allow that to happen. That’s why those of us are saying like, look, you pushed us into this corner. So now we’re now we’re saying we won’t vote for anyone but McCarthy. That’s why we’re saying it, because we cannot let the terrorists win. That’s basically what’s happening. And I do have to go…

Guy Benson: When you’re talking to some of these guys and you say that you’re having these conversations. I know you’re trying to do this in good faith and you’re trying to maintain some level of respect. You also just call them terrorists, like I’m just trying to figure out. It just feels like the animosity is getting visceral and personal, which might make it even harder to get out of this quagmire.

Crenshaw: Yeah. Yes, sure is. I mean, it’s you know, it is obviously, obviously a figure of speech, but it’s you know, it is what it is. I mean, you’re holding a gun to our head. What do you want? You know, and I don’t want to hear. I’ve already I’ve already been attacked by them because I’ve used harsh language and I’m like, you started this fight. If you don’t want to get into the Octagon and get punched in the face and don’t get into the Octagon, that’s how I feel about it. I mean, this is because there’s no good faith here. The good faith has been lost. We keep talking about good faith. And then they want to play victim. No. No. So now I’m not going to apologize for harsh language. You guys know me. That’s how I am. I speak boldly. You know, and this is this is. This is terrorism tactics. It is what it is. You know, I’m not the first one to use that term, by the way. You know, it’s this is getting out of control.

Listen to the audio below:

You can listen to the whole interview here.

On Tuesday, in an interview with CNN’s Manu Raju, Crenshaw blasted the GOP hold-outs for seeking “notoriety over principle.” He then told Raju the debates ended when the House Republican caucus nominated McCarthy for speaker.

Crenshaw’s tone toward his fellow GOPers turned sharper when he deliberately misconstrued their honorable opposition with narcissism.

“But if you’re a narcissist and you believe your opinion is so much more important than anyone else’s, then you keep going. And you’ll threaten to tear down the team for it for the benefit of the Democrats just for your own sense of self-importance. That’s exactly what’s happening here.”

Crenshaw blasted the 20 GOP for not backing McCarthy during an interview with Fox & Friends.