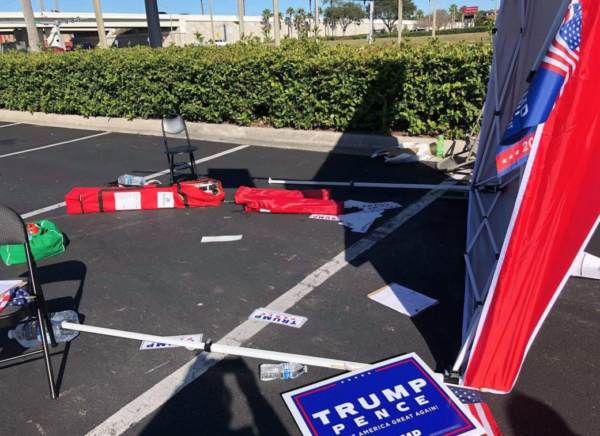 A violent leftist drove his van through a tent of GOP volunteers registering voters in Jacksonville, Florida.

Jacksonville police say a driver intentionally crashed a van through a tent where Duval County GOP volunteers were registering voters Saturday afternoon. Nobody was injured in the 3:45 p.m. incident at the Walmart Supercenter, 11900 Atlantic Boulevard, near Kernan Boulevard in the Sandalwood neighborhood, Lt. Larry Gayle of the Jacksonville Sheriff’s Office told reporters at the scene.

Several Duval County GOP volunteers were working at the registration tent when a white man in his early 20s driving an older — possibly 1980s — brown van pulled up toward the tent. He then drove through the tent, endangering the lives of the workers and damaging the tent and tables, Gayle said.

GOP Chair Ronna McDaniel and Senator Scott weighed in on the attack.