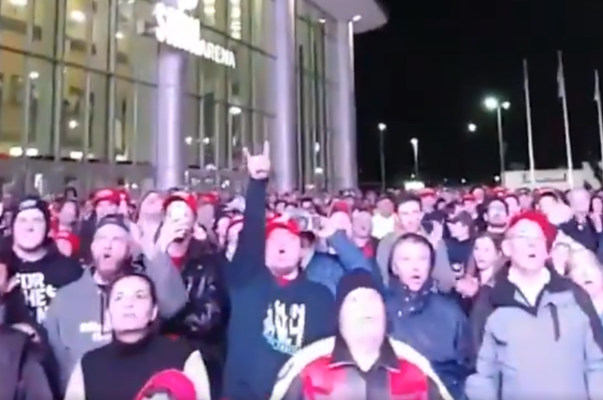 (Gateway Pundit) – President Trump held a huge campaign rally at a jam-packed 12,000 seat SNHU arena in Manchester, New Hampshire Monday night on the eve of that state’s first in the nation presidential primary. Supporters started lining up in the cold and rain two days in advance, with several thousand remaining outside to watch the rally on a Jumbotron after the doors were locked when the venue hit full capacity. Amazingly, there was an overflow crowd of hundreds apart from the overflow crowd of thousands outside the arena that gathered way across the street to view and hear the Trump rally on the Jumbotron from a distance.

View from inside the arena looking out, two photos by Jack Posobiec.

Video by Scott Ford shows the huge crowd in the main overflow area watching the rally just outside the arena.

Video by the BBC’s Anthony Zurcher shows part of the huge overflow crowd gathered across the street from the main overflow crowd.

Earlier Monday the Trump campaign blasted Bernie Sanders for falsely claiming he had the largest rally in New Hampshire this primary season with a crowd of 1,981 in Keene Sunday night.