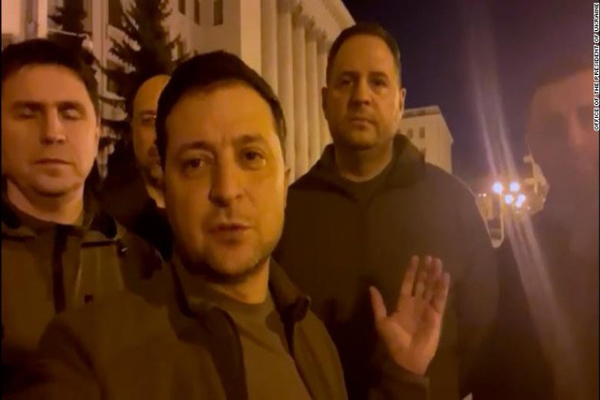 (breitbart) – A full-blown “major war” between Russia and the West could possibly break out over Ukraine, NATO Secretary General Jens Stoltenberg warned on Friday.

Commenting on the state of play ten months since Russia mounted a full-scale invasion of Ukraine, NATO chief Jens Stoltenberg said that it is a “fateful time for Europe” and that things could “go horribly wrong” and spill over from a proxy into a direct conflict between Russia and the NATO alliance.

Speaking with Norwegian public broadcaster NRK, Stoltenberg said: “I fear that the war in Ukraine will get out of control, and spread into a major war between NATO and Russia.”

The former Norwegian prime minister said that he is “confident” that such an eventuality could be avoided, noting the build-up of NATO forces in Central Europe.

While Ukraine is not a member of the alliance and therefore not guaranteed protection, Stoltenberg continued: “[Vladimir Putin] knows it’s one for all, and all for one. NATO’s most important task is to prevent full-scale war in Europe, and that is something we work on every single day.”

On possible negotiations for peace, Stoltenberg said: “At some point, conversations are useless. Putin had decided to use force and power. What helps is supporting Ukraine militarily. It is only a strong Ukraine that leads to peace.”

To date, the conflict has remained at a proxy war level between the West and Russia. with the European Union, United Kingdom, and the United States providing billions to Ukraine in the form of weapons, military equipment, vehicles, and money.

The Americans and British have also both undertaken the training of Ukrainian soldiers to educate them on how to use the advanced weaponry being supplied to Kyiv (Kiev).

Washington has also recently admitted that it has deployed military personnel into Ukraine itself, raising the possibility of American and Russian forces coming into contact with each other.

Despite the burgeoning energy crisis in Europe, the potential use of nuclear weapons, and the loss of life in Ukraine, there has apparently been little appetite for negotiations with Moscow from the American-led alliance or indeed the EU, with the notable exception of Hungary’s Prime Minster Viktor Orbán.

However, over the past week there has been some movement in Berlin and Paris, with both Chancellor Olaf Scholz and President Emmanuel Macron signalling a potential framework for peace talks.

President Macron said that in any settlement, the West must acknowledge Russia’s need for security guarantees, likely hinting at preventing Ukraine from joining NATO, which would allow America to station missiles on Russia’s doorstep. Chancellor Scholz, meanwhile, said that Europe should consider rekindling the peace agreements which stood during the Cold War.

Russian president Vladimir Putin, for his part, said that any negotiations would be difficult given that trust for the West in Moscow is currently  “almost at zero.”

The Russian leader cited a recent interview given by former German chancellor Angela Merkel, in which she appeared to imply that the motivation behind the 2014 Minsk agreement was merely to give Ukraine “time” to build up its military.

“Their point was only to load up Ukraine with weapons and prepare it for hostilities. We see that. Honestly, we may have realized that too late, and maybe should have started all this sooner,” Putin said in response to the Merkel interview on Friday.

Though Putin said he did not believe at the time that Ukraine would abide by the terms of the 2014 deal, he added: “I thought other participants in that process were honest. Turns out they too were deceiving us.”

“In the end, there will have to be talks. We are ready for them, I have said that many times. But it does make us think, who we’re dealing with.”

Ultimately, the Russian president said that he believes the current conflict could be a “long process,” claiming: “The special military operation is proceeding apace, everything is stable, there are no questions or problems with it today.”