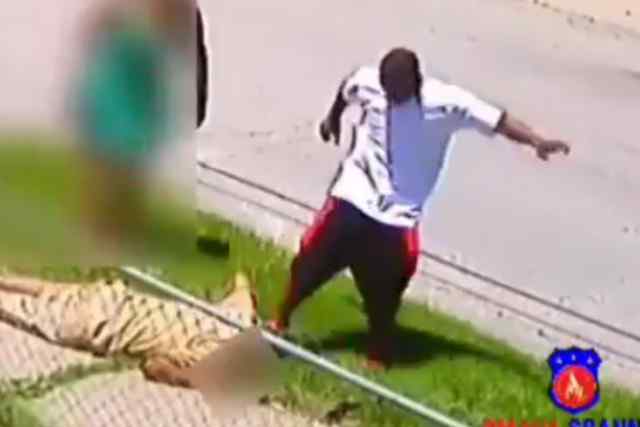 (Big League Politics) – Law enforcement in Omaha, Neb. are on the lookout for a robbery suspect who can be seen viciously kicking his helpless victim after reportedly striking him with a metal object. A female accomplice has been identified and brought in by authorities for her complicity in the heinous act.

Big League Politics has been reporting on the epidemic of black-on-white violence that is sweeping the country as the Black Lives Matter terror movement flexes its muscle.

A vicious black mob targeted white kids on the boardwalk in Ocean City, Md. on Tuesday night in a gruesome scene that was caught on video by a couple in a motel room. White kids were beaten senseless and presumably robbed by a large group of blacks who cackled and cheered on the thuggery as it took place. “We are equally horrified by the actions displayed on social media video depicting violence and unruly crowds. This behavior has no place in Ocean City, and violence like this will not be tolerated. The town and OCPD are working immediately on addressing this disturbing behavior,” Ocean City Mayor Rick Meehan said… City officials are worried about how a recent wave of violence will affect tourism in the town that is known for its beaches. More businesses could shutter because of this savagery that is being unleashed… As the Black Lives Matter terror movement gains traction throughout the country, criminal elements are feeling emboldened to rape and pillage with the police being too skittish to do much of anything to stop them.

A black man is now in custody after allegedly pushing over a 92-year-old white woman on a New York City street and causing her to sustain significant injuries:

A black man was caught on surveillance video pushing a 92-year-old white woman to ground, in the type of violence that is becoming commonplace due to the rise of the racially divisive Black Lives Matter (BLM) movement. Police have brought in 31-year-old Rashid Brimmage as the suspected culprit behind the attack. Brimmage is a serial criminal who has had constant run-ins with law enforcement, but has remained out of jail because of New York City’s lax criminal justice laws… “Thanks to the outstanding work of @NYPDDetectives, this suspect has been apprehended,” Police Commissioner Dermot Shea wrote in a tweet on Tuesday. Authorities say that the attack took place last Friday at 3:30 pm on 3rd Avenue near East 16th Street in the Gramercy Park area. The video footage was released on Monday, which resulted in Brimmage being apprehended as the suspect because cops were very familiar with him. Brimmage is a convicted sex offender who has more than 100 previous arrests. These are the types of folks who are being worshiped like gods because of the far-left cultural transformation that is underway. These instances of anti-white violence are becoming far more commonplace as well.

As diversity overwhelms the former land of the free, the rule of law is being replaced by rule of mob.