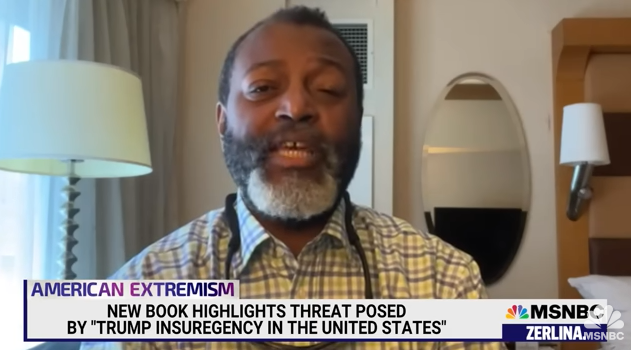 (breitbart) – Author and intelligence analyst Malcolm Nance said Wednesday night on Peacock’s “Zerlina” that the Republican Party has become an insurgency meaning Americans might have to fight their “neighbors.”

Nance said, “Here is the United States — to characterize that to understand what kind of terrorism we might be dealing with, you have to label it as white extremism because we have 30% of the population of the United States who no longer believe in the democratic norms that we established in the founding of the country. Let’s just be honest about that. The January 6 uprising was an attempt to overthrow American democracy. And we have now learned from the hearing that Donald Trump intended to go there  to march down to the well of the House of Representatives and essentially be crowned as a king.”

Anchor Zerlina Maxwell asked, “You call what is happening an insurgency. We have heard that term in foreign wars recently in Iraq. Talk about why you apply the term insurgency to what you see here as a persistent and ongoing threat of domestic extremists?

Nance said, “I was reading their forums. I was reading their own intelligence about what they intended to do. wIt was pretty clear at that point that they were going to try to either overthrow the government or they were going to settle in for a long-term series of destabilizing actions using a political party, the Republican party, as their political base and then using violence, threat of violent extremism as a way to manifest change in the street. So remove politics from the halls of power and change politics through violence on the street. This is called an insurgency. The insurrection that happened on January 6 that was one event. An insurgency is a chain of events. It’s common knowledge. A year and a half ago, when I was calling this an insurgency, people were saying, that’s crazy, this isn’t an insurgency, this isn’t like Iraq, it’s not like Libya, it’s not like Syria. Well, it is. And it’s well on its way. It’s closer to the beginnings of the Irish Republican Army. You know Irish Republicanism, where now the Republican Party is Sinn Fein, and it’s just a matter of seeing who comes up as the original Irish Republicans in this story and starts carrying out acts of violence to affect change. So we are well on our way to a multi-year campaign that we are already two years into this campaign where we may have to fight them. The ‘they’ in my title and the ‘they’ in my title is those who want to kill Americans are your neighbors.”