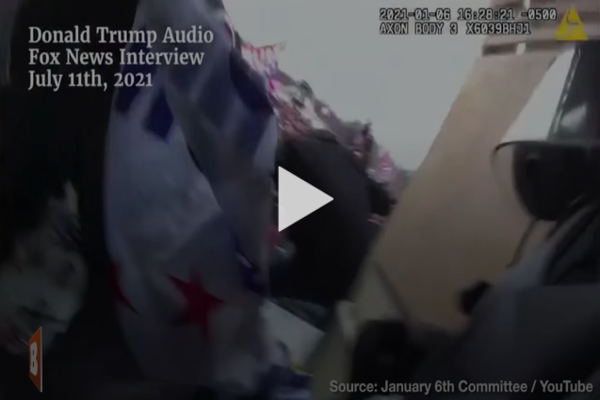 (breitbart) – The January 6 Committee played a deceptively edited video of the Capitol riot on Thursday evening, dubbing audio of former President Donald Trump describing the peaceful part of the rally over footage of violent clashes a mile away.

The video was presented during the committee’s first public hearing as part of a montage that Chair Rep. Bennie Thompson (D-MS) said included never-before-seen footage. The audio was from a Fox News interview of Trump on July 11, 2021.

The committee played Trump’s comments — which referred to his peaceful rally, over a mile away — over visuals of clashes between rioters and police. “They were peaceful people. These were great people,” Trump was heard saying. “The crowd was unbelievable. And I mentioned the word love. The love — the love in the air, I have never seen anything like it.”

In the original context, however, it was clear Trump was referring to his rally, not to the riot at the Capitol a mile away.

And a tremendous number of people, the largest one I have ever spoken before, is called by people, by patriots. And they asked me if I’d speak. And I did. And it was a very mild-mannered speech, as I think has been — in fact, they just came out with a report in Congress, and they didn’t mention my name, literally.

But what they were complaining about and the reason, in my opinion, you had over a million people there, which the press doesn’t like to report at all, because it shows too much — too much activity, too much — too much spirit and faith and love. There was such love at that rally.

You had over a million people there. They were there for one reason, the rigged election. They felt the election was rigged. That’s why they were there. And they were peaceful people. These were great people.

The crowd was unbelievable. And I mentioned the word love. The love — the love in the air, I have never seen anything like it.

And that’s why they went to Washington.

The committee edited the video and audio to suggest that Trump was referring to the rioters, not to the peaceful protesters.

There was no opportunity to question the deceptive video. Rep. Thompson called a recess immediately after the video was played, and there is no representative of the opposing side — neither on the committee itself, nor among the witnesses.